In a video on Reddit, a man wraps a stray puppy in his coat and then decides to adopt him 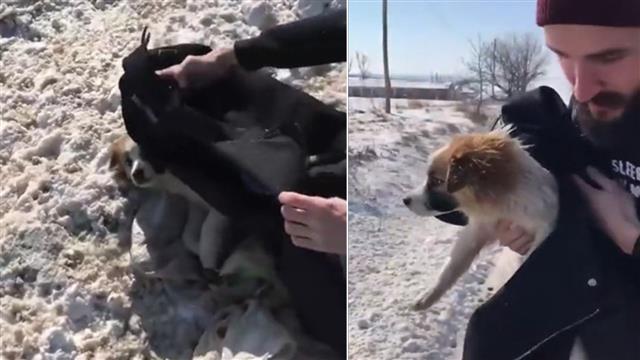 Screengrab from the video. Reddit/u/BeneficialLineage

A heartwarming video of a man taking a cute little pup in his care has everyone on the Internet cheering for this new-found bond. This video on Reddit shows how a man finds a puppy on roadside covered with snow. He picks him up and decides to adopt him.

In the video, the man sees a puppy lying on a snow-covered sidewalk. He stops and bends down to pick up the little pup, wraps him in his coat and then uncovers his eyes so the little animal feels safe. It’s an instant bond of love and trust that the two build.

Here's the video for you to enjoy:

In the caption of this cute video, the man wrote, “Found this guy on the side of the street today with the lady. Used a coat to pick him up as I wasn’t sure if he’d bite. Mate was happier than ever to get in the car. He got a bath at home and now is on the bed. I think we may be adopting.”

It’s been 9 hours since the video was shared and there are already more than 2,000 upvotes on the video. The viewers want to know more about the puppy. “Yaaaay! Update please show him all happy in blankeeets,” wrote a Redditor. Another one said, “I demand more videos of said pupper.” “I love to see people help animals. Nicely done,” read another comment. “You're a hero. I hope he has a long and happy life,” said another Redditor.

What do you think of this cute puppy video?