According to media reports, an announcer on Myanmar's military-owned Myawaddy TV declared on Monday morning that the military had taken control of the country for one year 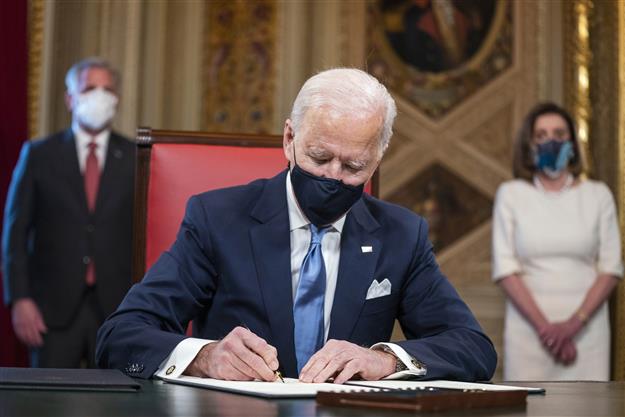 Alarmed over the coup in Myanmar and the detention of the country's top political leaders, including State Counsellor Aung San Suu Kyi, by the military on Monday, the US has said it is monitoring the situation closely and threatened unspecified action if corrective steps are not taken to restore democracy.

According to media reports, an announcer on Myanmar's military-owned Myawaddy TV declared on Monday morning that the military had taken control of the country for one year.

Myanmar's leader Suu Kyi and other senior figures from the ruling party had been detained in an early-morning raid, the spokesman for the governing National League for Democracy (NLD) was quoted as saying in the media.

"The United States is alarmed by reports that the Burmese military has taken steps to undermine the country's democratic transition, including the arrest of State Counsellor Aung San Suu Kyi and other civilian officials in Burma,” White House Press Secretary Jen Psaki said.

Burma is the former name of Myanmar.

"We continue to affirm our strong support for Burma's democratic institutions and, in coordination with our regional partners, urge the military and all other parties to adhere to democratic norms and the rule of law, and to release those detained today,” Psaki said.

The United States opposes any attempt to alter the outcome of recent elections or impede Myanmar's democratic transition, and will take action against those responsible if these steps are not reversed, she warned.

"We are monitoring the situation closely and stand with the people of Burma, who have already endured so much in their quest for democracy and peace," Psaki said.

"We call on Burmese military leaders to release all government officials and civil society leaders and respect the will of the people of Burma as expressed in democratic elections on November 8. The United States stands with the people of Burma in their aspirations for democracy, freedom, peace, and development. The military must reverse these actions immediately," he said in a statement.

The detention of the senior leaders comes after days of escalating tension between the civilian government and the powerful military, in the aftermath of an election the army says was fraudulent.

The NLD claimed victory after an election in November 2020, the country's second democratic ballot since the end of military rule in 2015.

Since her party won a landslide victory in 2015, Suu Kyi, the 75-year-old Nobel Peace Prize winner, has been Myanmar's de facto leader and held the position of state counsellor.

But her international reputation has been tarnished in recent years by allegations of genocide against Myanmar's Muslim Rohingya population. Myanmar denies the charges and has long claimed to have been targeting terrorists. PTI