American people have spoken, proved once again that democracy is who we are: Joe Biden : The Tribune India

American people have spoken, proved once again that democracy is who we are: Joe Biden 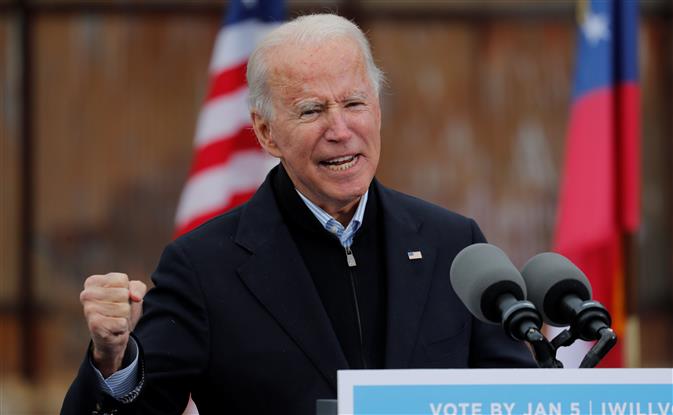 With their votes the American people have spoken and proven once again that democracy is who they are, US President Joe Biden said as his Democratic Party performed much better than expected and put a break on the opposition's “red wave” in the midterm polls across the country.

Both the Republicans and the Democrats were at 48 seats each in the 100 member-US Senate, while in House of Representatives, the GOP (Republican Party) was ahead with 207 seats against 183 of the Democratic Party.

The GOP is expected to cross the halfway mark of 218 but is falling far short of the expectations of sweeping the midterm elections and crossing at least 250 seats. Post elections, this is said to be the best performance by a current president in decades during midterm polls.

Biden, at a White House news conference, appeared to be confident and asserted that he would continue with his policies, which, he said, have “worked so far”.

“While we don't know all the results yet, at least I don't know them all yet, here's what we do know. While the press and the pundits were predicting a giant red wave, it didn't happen. And I know you were somewhat miffed by my incessant optimism, but I felt good during the whole process. I thought we were going to do fine,” he said.

“While any seat lost is painful, some good Democrats didn't win there last night, Democrats had a strong night. And we lost fewer seats in the House of Representatives than in any Democratic president's first midterm election in the last 40 years, and we had the best midterm for governor since 1986. Another thing that we know is that voters spoke clearly about their concerns, about the rising costs that need to get inflation down,” the President said.

During an hour-long press conference in the historic Dining Room of the White House, Biden said the people of the country sent a “clear and unmistakable” message that they want to preserve democracy and protect the right to choose in “this country”.

“And I especially want to thank the young people of this nation who I'm told, I haven't seen the numbers, voted historic numbers again, and just as they did two years ago,” he said.

“They voted to continue addressing the climate crisis, gun violence, their personal rights and freedoms, and the student debt relief,” he said.

Giving his impression of the election results, Biden said the voters were also clear that they are still “frustrated”.

“I get it. I understand it's been a really tough few years in this country for so many people,” he said.

“When I came to office, we inherited a nation with a pandemic raging and an economy that was reeling, and we acted quickly and boldly to vaccinate the country and to create a stable and sustained growth in our economy, long-term investment to rebuild America itself, our roads, our bridges, our ports, our airports, clean water systems, high-speed internet,” Biden told reporters.

“We're just getting started. The interesting thing is that this is all going to really come into clearer view for people in the months of January, February, and March of next year. It's just getting underway. So, I'm optimistic about how the public can even be more embracing of what we've done,” he said. The country, he said, is dealing with global inflation as a result of the pandemic and Putin's war in Ukraine.

“We're also handling it better than most other advanced nations in the world. We're lowering gas prices. We're taking on powerful interests to lower prescription drug costs and health insurance premiums and energy bills,” he added.

Biden said he believed his administration took the right steps for the country and for the American people.

“In fact, if you look at the polls, the overwhelming majority of the American people support the elements of my economic agenda, from rebuilding America's roads and bridges to lowering prescription drug costs to historic investment in tackling the climate crisis to making sure that large corporations begin to pay their fair share in taxes,” he said.

“I'm confident these policies are working and that we're on the right path, and we need to stick with them. All these initiatives take hold, as they do from lead pipes being removed from schools and homes to new factories being built and communities with a resurgence of American manufacturing that's already created, by the way, 700,000 brand new manufacturing jobs,” Biden said.