Imran, other PTI leaders booked over arson and vandalism by supporters 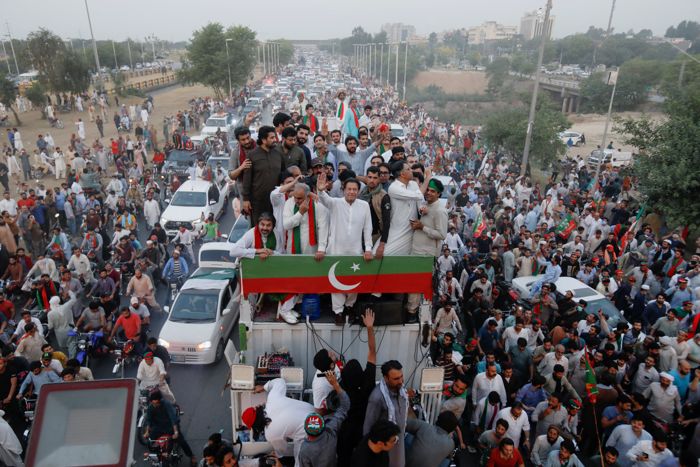 Ousted Prime Minister of Pakistan Imran Khan on Thursday gave a six-day deadline to the Shehbaz Sharif government for dissolving provincial assemblies and announcing fresh general elections, warning if the "imported government" failed to do so, he would return to the capital with the "entire nation".

Addressing a rally of thousands of protesters of the ‘azadi march' at Jinnah Avenue here on Thursday, Khan lashed out at the government for using “tactics” like raids and arrests to stop his party's march, even as he thanked the Supreme Court for taking notice of the matter.

"The government has tried every method to crush our azadi march. They used teargas on peaceful protest, our homes were raided and privacy of homes was violated. But I have seen the nation free itself of fear of slavery,” he said. "My message for the imported government is to dissolve assemblies and announce elections, otherwise I will come back again to Islamabad after six days,” he was quoted as saying. Warning Imran Khan that his "dictation won't work", Pakistan PM Shehbaz Sharif made it clear on Thursday that Parliament would decide the date for the general elections after a disruptive protest by the ousted premier to force a snap poll in the country.