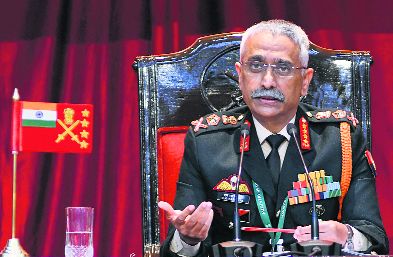 Army Chief General Manoj Mukund Naravane arrived in Colombo on Tuesday on a four-day visit during which he will meet the top civilian and military leadership of Sri Lanka and discuss avenues for further enhancing bilateral defence cooperation.

To call on President

Army Chief General MM Naravane is expected to call on President Gotabaya Rajapaksa, who is the Commander-in-Chief of the Sri Lankan armed forces, and PM Mahinda Rajapaksa.

“Gen Naravane arrived in Sri Lanka and was extended a warm welcome by General Shavendra Silva, Chief of Defence Staff and Commander of Sri Lankan Army, at the airport,” the Indian Army said in a tweet.

"His visit will pave the way for deeper cooperation in defence between India and Sri Lanka," the Indian High Commission here said in a tweet.

During his visit, Gen Naravane is expected to call on President Gotabaya Rajapaksa, who is the Commander-in-Chief of the Sri Lankan Armed Forces, and Prime Minister Mahinda Rajapaksa.

On Wednesday, Gen Naravane would be honoured at the Army Headquarters, the Lankan Army said.

On Thursday, he will witness the final demonstration of the ongoing bilateral Exercise 'Mitra Shakti' at Maduru Oya Special Forces Training School in the east.

India and Sri Lanka last week began a 12-day mega military exercise with a focus on enhancing counter-terror cooperation at the Combat Training School in the island nation's eastern district of Ampara. — PTI