As lockdown lifts, Barcelona plants enjoy a day at the opera : The Tribune India

As lockdown lifts, Barcelona plants enjoy a day at the opera 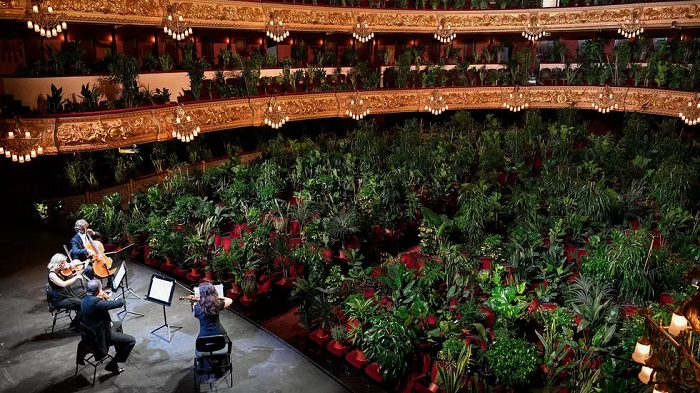 The lights dim, the curtain rises and the music begins — all signs normal life has returned to Barcelona's Liceu opera house, were the seats not filled with some 2,300 plants.

After months of silence, the emblematic opera house located in central Barcelona decided to throw open its doors with a unique performance — a metaphor for the months of lockdown when nature took back space from people.

Barcelona’s Liceu opera reopens its doors with a concert for plants pic.twitter.com/EucVjfzNOy

Seated in the plush red seats of the stalls, the dress circle and the boxes were an eye-catching array of 2,292 ficus trees, palms and Swiss cheese plants, their verdant green contrasting with the ornate gold columns and mouldings of the auditorium.

On the stage, which has stood empty since mid-March, a string quartet played the beautiful lilting melodies of Puccini's Crisantemi — or The Chrysanthemums.

The idea of the concert came to conceptual artist Eugenio Ampudia during the lockdown when the normal bustle of urban living was silenced, the sound of birdsong was much clearer and the plants around his house grew more vigorously.

The idea was to have people reflect on the concept of sustainability and their relationship with nature.

"I thought why don't we go into the Liceu like weeds, take it over and let nature start growing everywhere and turn it into something alive even when there are no people," he told reporters.

It was like "a visual poem, both a subtle metaphor but one which makes us smile," said the Liceu's artistic director Victor Garcia de Gomar.

The concert was streamed live on the theatre's website so those who wanted to could put it on for their own plants at home to hear.

"We are at the end of an era and that means that we have to change certain paradigms," Ampudia said.

"We don't live in the same world as 90 days ago, and this means we have to reflect on everything that we do."

After the concert, all the plants were to be donated to healthcare professionals who have worked on the frontline fighting the virus over the past few months. — AFP