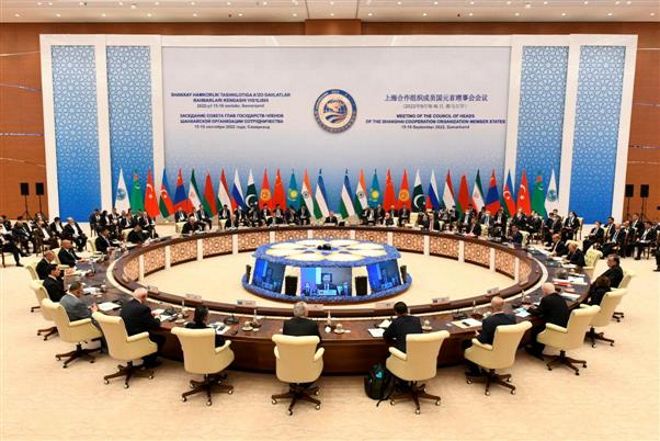 India once again refrained from affirming support for China's One Belt, One Road (OBOR) initiative in the Joint Declaration issued after the Samarkand summit of the Shanghai Cooperation Organisation held on Friday.

However, all eight members endorsed the need to develop common principles and approaches to form a unified list of terrorist, separatist and extremist organisations whose activities are prohibited on the territories of the SCO member states. They also stressed the importance of “consistent implementation” of SCO’s 2022-2024 Programme of Cooperation in countering terrorism, separatism and extremism. This formulation meets India’s stance that there should be no double standards on terrorism and the world must unitedly crack down on all forms of terrorism.

The 121-point declaration that covered every conceivable topic, said Central Asia was the core of the SCO and advocated further strengthening the role of the SCO in enhancing stability and socio-economic development in the region.

The Summit saw Bahrain, Maldives, Kuwait, UAE and Myanmar being given the status of SCO dialogue partners. The MoU for granting the SCO dialogue partner status to Egypt, Saudi Arabia and Qatar was also inked. The expansion, said the joint statement, would enhance the SCO’s role as a multilateral mechanism for addressing topical contemporary issues, ensuring security, stability and sustainable development in the region.