The shooting occurred during a lunch banquet after a morning service in the church. 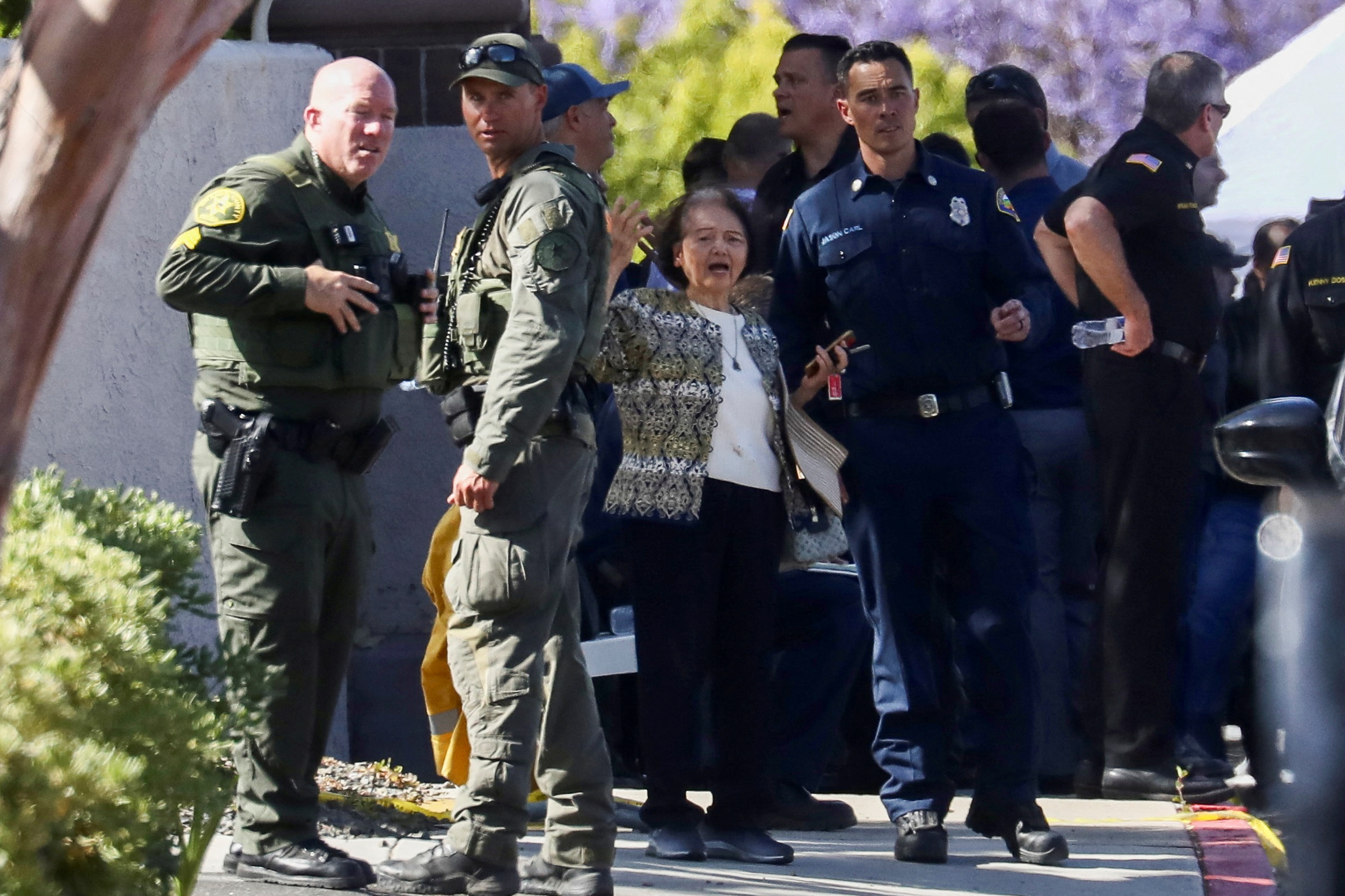 A woman reacts next to law enforcement officers after a deadly gunfire erupted at Geneva Presbyterian Church in Laguna Woods, California, U.S. May 15, 2022. Reuters

Police say churchgoers detained the gunman who shot multiple people Sunday at a California church, calling their intervention an act of "exceptional heroism and bravery."

Police say the suspect in the shooting is an Asian male in his 60s who investigators do not believe lives in the community.

The shooting occurred during a lunch banquet after a morning service in the church.

Police say by the time they arrived on the scene the parishioners had the man hog-tied and in custody.

Investigators were interviewing between 30 and 40 witnesses.

One person was killed and four others were critically wounded in a shooting Sunday afternoon at a Presbyterian church in a suburban Southern California community where the majority of residents are seniors, officials said. A suspect was in custody.

The shooting was reported shortly before 1.30 pm at Geneva Presbyterian Church in the city of Laguna Woods, the Orange County Sheriff's Department said on Twitter.

A man died at the scene and a fifth injured person suffered minor injuries, officials said. All the victims were adults.

Deputies detained a suspect, an adult male, and recovered a weapon, officials said.

About 30 people witnessed the violence, said Carrie Braun, a sheriff's spokesperson. The majority of those inside the church are believed to be of Taiwanese descent, Braun said.

Investigators were looking at many factors, including whether the bloodshed could be a hate crime and whether the gunman was known to the church community, Braun said.

The gunfire erupted during a lunch reception honoring a former pastor of a Taiwanese congregation that has services at Geneva, according to a statement from the Presbytery of Los Ranchos, a church administrative body.

“Please keep the leadership of the Taiwanese congregation and Geneva in your prayers as they care for the those traumatized by this shooting,” the presbytery's Tom Cramer said in a statement on Facebook.

Federal agents from the Bureau of Alcohol, Tobacco, Firearms and Explosives were responding to the scene. The FBI was also sending agents to the scene to assist the sheriff.

Laguna Woods was built as a senior living community and later became a city. More than 80 per cent of residents in the city of 18,000 people about 50 miles (80 kilometers) southeast of Los Angeles are at least 65.

Governor Gavin Newsom's office said on Twitter that he was closely monitoring the situation.

“No one should have to fear going to their place of worship. Our thoughts are with the victims, community, and all those impacted by this tragic event," the tweet said.

The incident occurred in an area with a cluster of houses of worship, including Catholic, Lutheran and Methodist churches and a Jewish synagogue.

On its website, Geneva Presbyterian Church describes its mission as “to remember, tell, and live the way of Jesus by being just, kind, and humble.”

“All are welcome here. Really, we mean that! … Geneva aspires to be an inclusive congregation worshipping, learning, connecting, giving and serving together.”

The shooting came a day after an 18-year-old man shot and killed 10 people at a supermarket in Buffalo, New York.

“This is upsetting and disturbing news, especially less than a day after a mass shooting in Buffalo,” said US Rep Katie Porter, whose district includes Laguna Woods. “This should not be our new normal. I will work hard to support the victims and their families.” (AP)