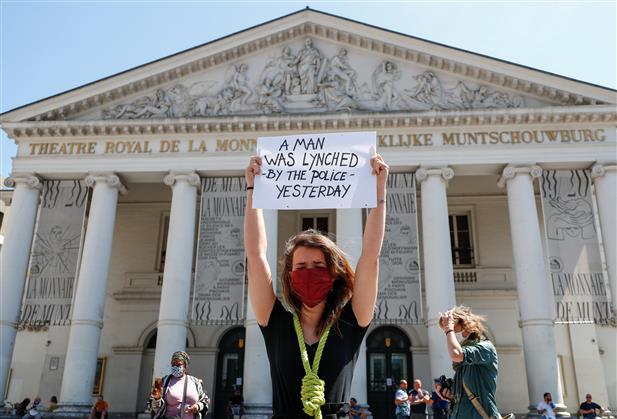 A protester wearing a face mask, holds a placard as she takes part in a protest against the death in Minneapolis police custody of African-American man George Floyd, in central Brussels, Belgium. Reuters

In France, family and friends of a French black man who died shortly after he was arrested by police in 2016 have called for a protest on Tuesday which will also pay homage to George Floyd.

The circumstances of the death of Adama Traore, a French 24-old-man of Malian origin, are still under investigation by justice authorities.

Calls for Tuesday’s protest in front of the Paris court come after some medical experts last week attributed the death to a cardiac problem, the latest in a series of conflicting medical assessments.

French police claimed Traore died of a heart attack due to pre-existing medical condition. His family said he died from asphyxiation from police tactics.

In a video message published on social media, Traore’s sister Assa Traore calls for protesters to express their indignation “at a time when the world, when France is outraged by the death of George Floyd”.

She denounced the latest medical experts’ report as “racist” and “untrue”.

The family wants the officers in charge of Traore’s arrest to go on trial. AP