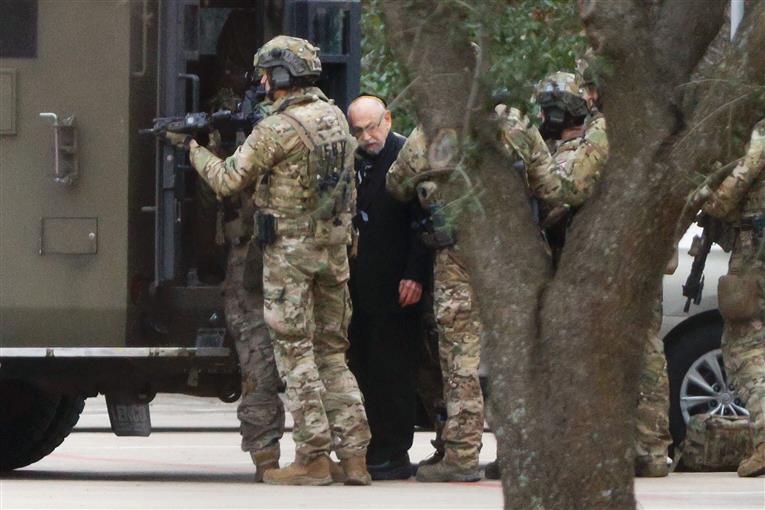 Security personnel escort a hostage out of a synagogue in Colleyville. AP

Four hostages were safe and their captor was killed after hours of standoff at a synagogue here. The man took over services at the synagogue, where he could be heard demanding the release of Aafia Siddiqui, a Pakistani neuroscientist convicted of trying to kill US Army officers in Afghanistan.

One hostage held captive at Congregation Beth Israel in Colleyville was released during the standoff, while three others got out about 9 pm when an FBI SWAT team entered the building, authorities said.

The FBI has identified the captor as 44-year-old British citizen Malik Faisal Akram. He was killed and FBI Special Agent in Charge Matt DeSarno said a team would investigate “the shooting incident”. Videos showed people running out of the door of the synagogue and a man holding a gun. Several rounds of gunfire can be heard in the video followed by the sound of an explosion.

FBI and police spokesperson declined to answer questions about who shot the man.

DeSarno said the captor was specifically focused on an issue not directly connected to the Jewish community, and there was no immediate indication that the man was part of any broader plan. But DeSarno said the agency's investigation “will have global reach”. It wasn't clear why the attacker chose the synagogue.

Law enforcement officials said the hostage-taker demanded the release of Aafia Siddiqui, a Pakistani neuroscientist suspected of having ties with Al-Qaida. He also said he wanted to be able to speak with her, according to the officials. Siddiqui is in federal prison in Texas. The standoff had prompted increased security in other places, including New York City, where police said that they had increased their presence “at key Jewish institutions” out of an abundance of caution.

President Joe Biden called "an act of terror". "Rest assured, we are focused. The attorney general is making sure that we deal with these kinds of acts," he said. — AP

Al-Qaida operative at centre of storm

This event is a stark reminder that antisemitism is still alive and we must continue to fight it worldwide. I am relieved that the hostages were rescued. Naftali Bennet, israel prime minister