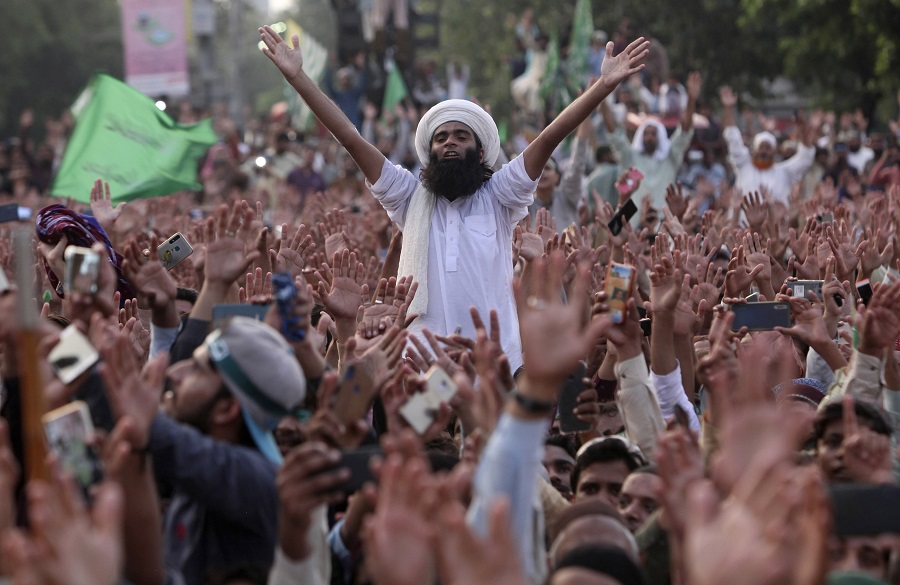 Supporters of a religious group Tehreek-e-Labaik Pakistan chant slogans during a rally to condemn the French weekly magazine Charlie Hebdo for republishing caricatures of the Prophet Muhammad, in Lahore on Friday. AP/PTI

The fugitive widow of the Islamic State killer who plotted attacks against the Charlie Hebdo satirical newspaper and a kosher market calls home to France once a year to catch up, her sisters testified, offering new details about one of the world's most wanted women.

Hayat Boumeddiene is the only woman among 14 people being tried in French terrorism court for the January 7-9, 2015, attacks that left 17 people dead along with all three attackers, including her husband.

Boumeddiene left for Syria a few days before the attacks. She and the two men who arranged her escape are being tried in absentia as accomplices in the attacks.

The other 11 defendants whose two-month trial began September 2 are accused of helping with logistics, including buying the weapons and tactical gear for brothers Saïd and Chérif Kouachi and Amédy Coulibaly. Most say they had no idea the plan was for a mass killing, saying they believed it was for an ordinary crime.

Saadia Benali, whose family took in Boumeddiene for five years, late Friday described her fugitive sister's religious marriage to Coulibaly and the couple's deepening belief in ever more radical forms of Islam.

Benali herself was dressed head to toe in the black robe and veil worn by many devout Muslims as she testified.

She said Coulibaly, a career criminal with multiple convictions for theft and violence even before he stormed the Hyper Cacher supermarket, “was very sweet, gentle, respectful.”

“He went to the extreme to avenge his brothers. I think he was someone who was just too sensitive,” she said. “And Hayat lived for Amédy.”

Benali said Boumeddiene calls her at least once a year, the last time at the end of 2019. She said she didn't bother telling police about it “because I know I'm being tapped.”

Soon after the attacks, Boumeddiene called to apologise, said her older sister, Keltoum.

“She apologized for any trouble she could have caused us, but not for the rest,” Keltoum Boumeddiene said. She didn't talk much about her husband, Benali said.

“She just said ISIS was so proud of what he'd done. She was very protected, she was doing her thing, euphoric. She tried to get us to come to Syria. She was just in her own world. I thought she'd been brainwashed,” Benali said.

More recently, she's been “less happy, less vibrant than she was at the beginning,” Keltoum Boumeddiene said. But never has she said she wants to return to France. Her sisters say she has no children.

Boumeddiene's own childhood was troubled. Her mother died when she was 8, and her first foster family sent her away after she was accused of trying to beat up a policewoman at age 14. She landed in the Benali family at age 14, and stayed there until she met Coulibaly at age 19.

She kept her relationship with Coulibaly hidden at first because her foster father didn't want her to marry an African.

“She went back to her biological father to be able to marry him,” Benali said.

She hasn't mentioned any new relationships since, said her older sister, describing their most recent call as “just catching up. From what she told me, she hasn't made a new life for herself. She's single and surrounded by families and children.”

It was during one of Coulibaly's many stints in prison that he met one of the Kouachi brothers — and most of the 11 other defendants. What most have in common are past convictions for drug trafficking, violence or organized crime. Most have used the word “shame” to describe their current predicament.

The only one of the 11 accused as a direct accomplice in the attacks is Ali Riza Polat, a friend of Coulibaly's who described himself as “a man of money, not religion.”         “If I had just stuck with drugs, I wouldn't be here,” Polat said. Asked by the judge what he would do if he leaves prison, Polat was unequivocal.

“I'll go back to crime, I tell you that openly. I'm not into religious conflict. I'm not against anyone.”

As for Charlie Hebdo and the attack on the supermarket? “You can't do that. You can't kill people, innocent people.” AP