Charlie Hebdo uncowed after attacks, but now with bodyguards : The Tribune India

Charlie Hebdo uncowed after attacks, but now with bodyguards 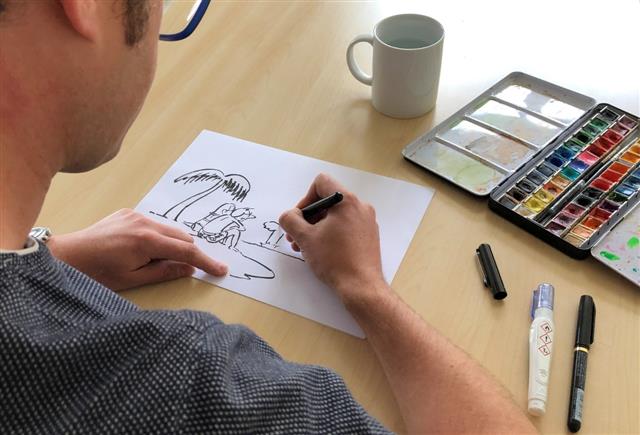 More than five years after Islamist militants killed 12 of their colleagues, staff at French satirical magazine Charlie Hebdo say they re-published cartoons of the Prophet Mohammad to tell the world they are "still standing"---albeit with a security detail.

Police officers guard the entrance to the magazine's new, bunker-like office, and some staff have bodyguards shadowing them.

"We say 'Good morning' to the cops when we arrive in the morning," said Laure Daussy, a writer who joined the magazine soon after the attacks. "That's not something you ought to get used to."

The gunmen are dead, but on September 2 a Paris court began hearing the trial of 14 people accused of being their accomplices. To mark the start of the trial, Charlie Hebdo republished the cartoons which, when first published, turned it into a target of searing anger and a global symbol of free speech.

"It's to show that we are still standing, still alive, still doing Charlie," said Antonio Fischetti, who has worked for Charlie Hebdo since 1997.

Anticipating strong sales, the magazine said it printed 200,000 copies of last week's issue.  While before it struggled to stay afloat with weekly sales of 30,000, the first edition after the attacks sold 8 million copies. Weekly sales have now settled back to around 55,000, the magazine said.

Tens of thousands of people protested in Pakistan on Saturday over the re-publication, chanting "Death to France". In France, criticism has been muted.

The rector of the Grand Mosque of Paris, Hafiz Chems-eddine, wrote after the cartoons were republished that Charlie Hebdo should continue to express itself.

Abdallah Zekri, director of the French Council for the Muslim Faith, called on French Muslims to ignore the re-published cartoons. "I think it's an operation by Charlie Hebdo for PR, for marketing," Zekri told the Franceinfo broadcaster. "I leave that to its conscience."

While the years since the attack have not blunted Charlie Hebdo's willingness to provoke, they have brought a keener understanding of the cost this carries, according to current and former staff.

The magazine moved its offices to an undisclosed location that several staff described as a windowless bunker. The magazine also employs a private security firm at a cost of about 1 million euros per year to guard the newsroom.

Body guards provide by state law enforcement agencies are assigned to some cartoonists and writers, according to several Charlie Hebdo staff.

An interior ministry spokesman said the ministry had no information to give on the subject of Charlie Hebdo's security arrangements.

Pierrick Juin, a Charlie Hebdo cartoonist, who joined after the attacks, said he tends not to say where he works when he's on reporting trips. "You don't know how it's going to be received," he said.

On the day of the Charlie Hebdo attack, veteran writer Fischetti was out of the office at his aunt's funeral.

The biggest change since then, he said, was the mood in the magazine's offices.

"When I first joined Charlie at the end of the 90s there was this carefree-ness. It was a gang of buddies who goofed around, had fun, had a laugh."

"Now, we're no longer in that carefree era. We've lost that forever." Reuters

From talking about Hindi films to dancing to his popular tra...