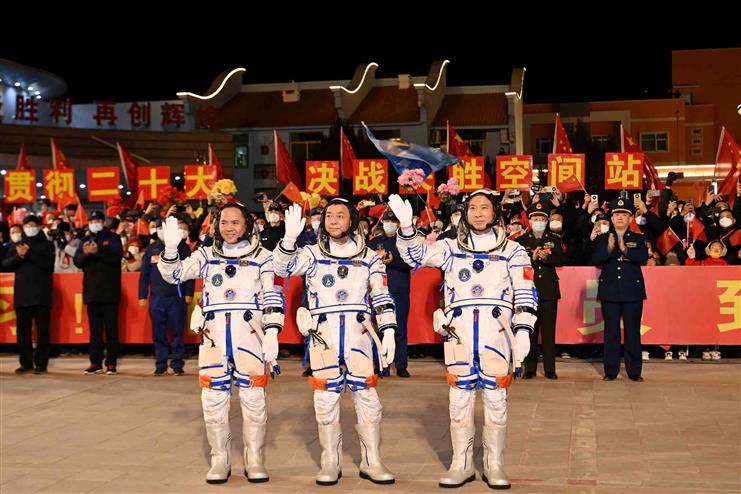 China on Tuesday successfully launched a spacecraft carrying three astronauts to its under-construction space station where they would meet with their colleagues and conduct a work handover, amid intensifying competition with the United States.

The Shenzhou-15 spaceship, atop the Long March-2F Y15 carrier rocket, blasted off from the Jiuquan Satellite Launch Center in northwest China on Tuesday night, according to the China Manned Space Agency (CMSA).

Fei will be the commander of the mission, Ji Qiming, assistant to the director of the CMSA, told the media.

Minutes after the launch, which was telecast live, an official at the control room announced that the launch was successful.

The Shenzhou-15 astronauts will, for the first time in China’s space history, conduct an in-orbit rotation with the Shenzhou-14 crew, who were sent to the space station in June, said the CMSA.

This is the first time six astronauts will live in the space station which is under construction. After five days, the crew of the Shenzhou-14 will return to earth after completing their six months stint.

During their six-month mission, the Shenzhou-15 crew will carry out tests related to long-term residence in China’s space station at its three-module configuration, Ji said.

This will be the last flight mission in the construction phase of China’s Space Station, official media reported.

The launch was carried out with a Long March-2F carrier rocket.

The crew will stay in orbit for about six months, a period in which the construction of the low-orbit space station is expected to be completed.

After entering orbit, the Shenzhou-15 spaceship will make a fast, automated rendezvous and dock with the front port of the space station’s core module called Tianhe, Ji told the media on Monday.

This is the third manned mission launched by China to link up with its space station.

Two batches comprising three astronauts were flown to the space station, on a six-month mission each to build the orbiting station.

While one set of astronauts returned, another set of three astronauts is currently based in Tianhe.

As per the plans announced earlier by China, the space station is expected to be completed by the end of this year.

Once ready, China will be the only country to own a space station.

The International Space Station (ISS) of Russia is a collaborative project of several countries.

China Space Station (CSS) is also expected to be a competitor to the ISS built by Russia.

Observers say the CSS may become the sole space station to remain in orbit once the ISS retires in the coming years.