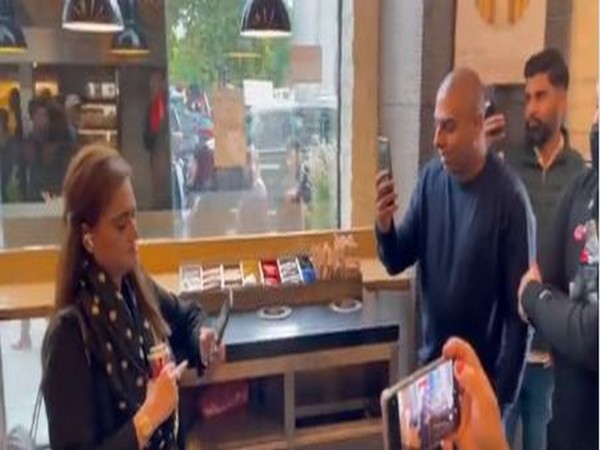 A screen grab of Pakistan Minister Marriyum Aurangzeb being heckled at a coffee shop in London. Credit: ANI

Pakistan Information Minister Marriyum Aurangzeb was heckled by overseas Pakistanis at a coffee shop in London.

A video of overseas Pakistanis circling Marriyum has gone viral on the Internet. They were criticising the minister for paying foreign visits amid flood devastation across Pakistan, reported ARY News.

Pakistanis followed, the daughter of Prime Minister Nawaz Sharif, out on the streets while shouting 'chorni, chorni (thief, thief)'.

A few videos of the incident circulated across social media showing Marriyum not reacting to the protesters and keeping herself busy on her mobile phone.

Meanwhile, the Pakistani ministers defended Marriyum and said she handled the situation with "grace and composure", reported the Dawn.

According to the Dawn, Marriyum was harassed by the supporters of former Pakistan PM Imran Khan.

A woman in the video could be heard accusing Marriyum of "making grand claims on television” but not carrying a dupatta on her head.

Replying to the video shared by a Pakistani journalist, Marriyum said she was "sad to see the toxic impact Imran Khan's politics of hate and divisiveness have had on our brothers and sisters."

The minister also added that she had stayed back at the coffee shop and answered "each and every question" of the riled-up crowd, reported the Dawn.

Finance Minister Miftah Ismail saluted Marriyum for her "grace and composure" in the face of harassment and baseless lies.

I salute my sister @Marriyum_A for her grace and composure in the face of such harassment and baseless lies from that uncouth woman (who can be heard but thankfully cannot be seen). https://t.co/YHyn9Hvrnb

"I salute my sister @Marriyum_A for her grace and composure in the face of such harassment and baseless lies from that uncouth woman (who can be heard but thankfully cannot be seen)," he said in a tweet.

Taking to Twitter, Defence Minister Khawaja Asif was dejected over the overseas Pakistanis representing the lowest level of society.

"Giving this colour to political differences is a sign of bad training and a trend that is the height of intolerance. The violent trend in politics after Madhhab will destroy our society," he added.

Planning Minister Ahsan Iqbal termed the incident as the "most deplorable, condemnable and shameful act by PTI hooligans."

Most deplorable, condemnable and shameful act by PTI hooligans. These were Hitler’s tactics. Imran is a fascist and turning his followers into street gangs.
Well done @Marriyum_A you showed grace & faced them boldly.
Truly a Sherni! https://t.co/YSmHt0o6Vb

He praised the information minister for showing grace and "boldly" facing the crowd. "Truly a lioness!" Iqbal added as quoted by the Dawn.