Death toll in Sri Lanka violence rises to 8, over 200 injured in violence : The Tribune India

Death toll in Sri Lanka violence rises to 8, over 200 injured in violence 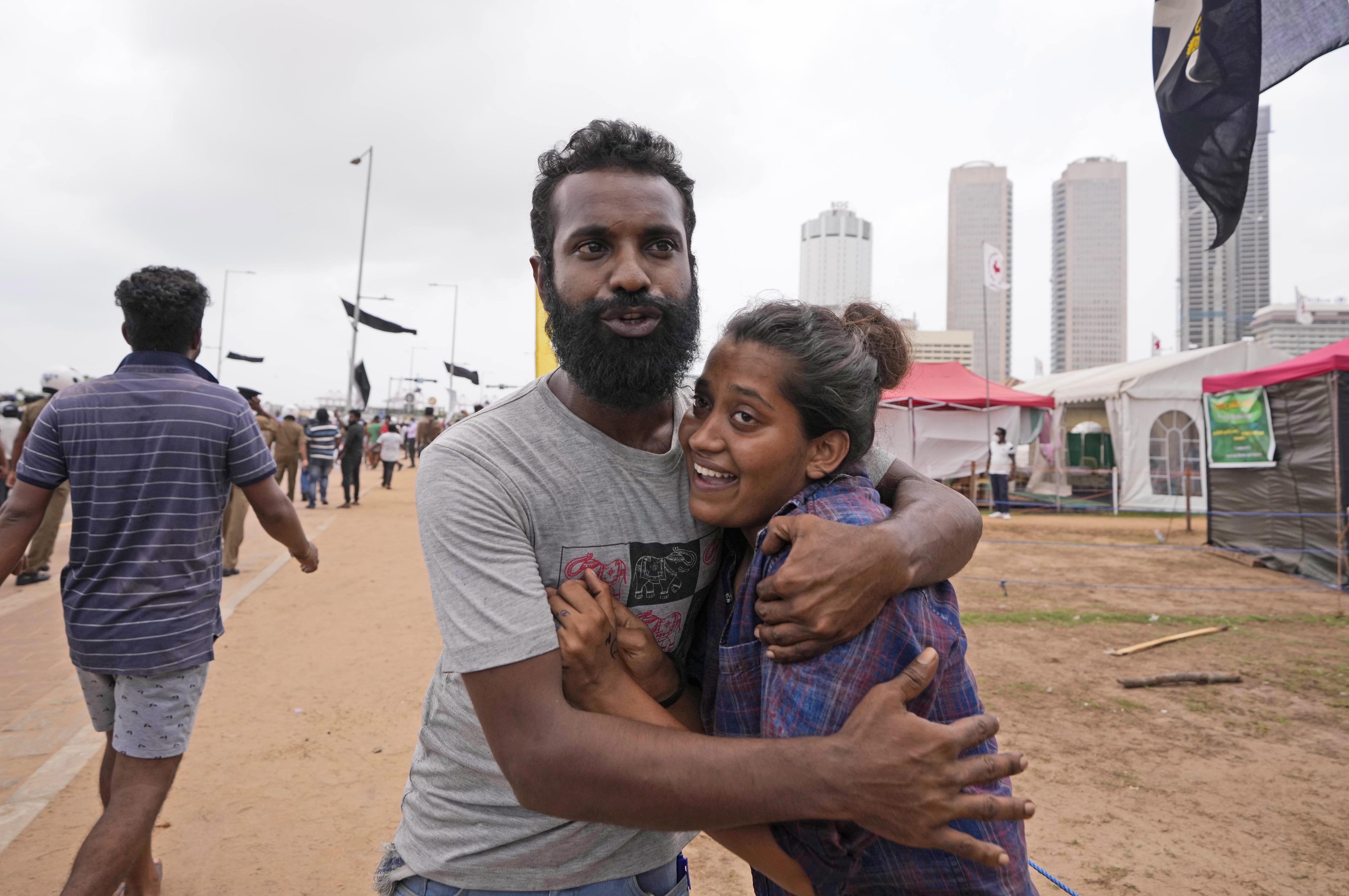 A Sri Lankan anti-government protester, left, consoles another during a clash with government supporters in Colombo, Sri Lanka, Monday, May 9, 2022. AP/PTI

The death toll rose to eight on Tuesday in the unprecedented violence in Sri Lanka that erupted after supporters of former prime minister Mahinda Rajapaksa attacked peaceful anti-government protesters demanding his ouster over the country's worst economic crisis that led to acute shortages of staple food, fuel and power. Over 200 people have also been injured in the violence in Colombo and other cities.

The violence saw arson attacks on the homes of several politicians, including the ancestral home of the Rajapaksas in Hambantota. Video footage showed the entire house of Prime Minister Mahinda Rajapaksa and his younger brother and President Gotabaya Rajapaksa in Medamulana in Hambantota city was burning.

Prime Minister Mahinda's House in Kurunegala was also set on fire by protesters while a mob also destroyed D A Rajapaksa Memorial - constructed in the memory of the father of Mahinda and Gotabaya - in Medamulana, Hambantota.

Chairman of the Imaduwa Pradeshiya Sabha A V Sarath Kumara died following an attack on his residence on Monday. Kumara, 63, was admitted to the hospital due to a heart condition following the attack. One person was killed following an attack on a popular hotel in Negombo. Multiple luxury cars worth millions of rupees were completely destroyed. SLPP Member of Parliament Amarakeerthi Athukorala and his security guard died in Nittambuwa on Monday.

Eye-witnesses said that the people who had come with the Member of Parliament to Nittambuwa shot at a group of people protesting against the attack on the peaceful protesters in front of the Temple Trees and the President's Office. A 27-year-old male died in the shooting incident. Two people were killed in a shooting that took place at the Weeraketiya Pradeshiya Sabha Chairman's residence on Monday night. A person succumbed to his injuries at the hospital in Colombo.

The Colombo national hospital said at least 217 people had been admitted for treatment. Several properties of ministers and lawmakers of the ruling coalition were destroyed by the protesters. Protesters have also attacked the house of Badulla District parliamentarian Tissa Kuttiarachch and later set it on fire. The house of Puttalam MP Santha Nishantha was completely destroyed due to an arson attack.

There have been protests over soaring prices and power cuts since last month. Sri Lanka is facing its worst economic crisis since gaining independence from Britain in 1948.  The crisis is caused in part by a lack of foreign currency, which has meant that the country cannot afford to pay for imports of staple foods and fuel, leading to acute shortages and very high prices.

Thousands of demonstrators have hit the streets across Sri Lanka since April 9 seeking the resignation of President Gotabaya and his brother Mahinda, as the government ran out of money for vital imports; prices of essential commodities have skyrocketed and there are acute shortages in fuel, medicines and electricity supply.

In a special Cabinet meeting on Friday, President Gotabaya Rajapaksa declared a state of emergency with effect from Friday midnight. This is the second time that an emergency was declared in Sri Lanka in just over a month as the island nation was in the grip of the worst economic crisis.