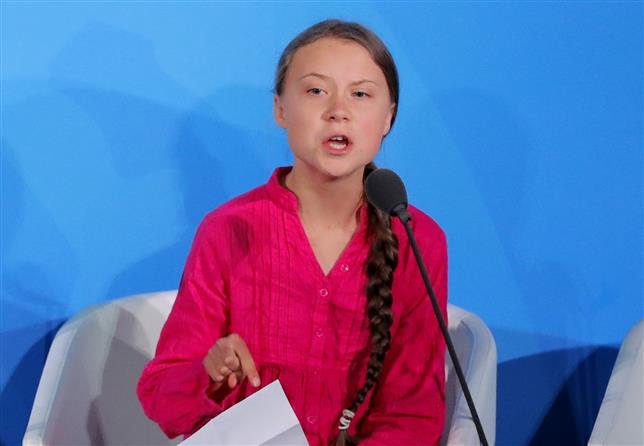 Taking cognisance of her tweets in support of farmers’ agitation in India, Delhi Police have registered a case against Swedish teen climate campaigner Greta Thunberg under Sections 120B and 153-A of the Indian Penal Code (OPC) on charges of “criminal conspiracy and promoting enmity”.

On February 3, the teen activist took to the microblogging site to express her concerns over farmers’ agitation and shared a post stating solidarity with the farmers. Sources said the Delhi Police has registered a case against Greta under Section 120B and 153-A of the IPC.

"So far no one has been named in the FIR but all of you know about the Twitter handle I am talking about,” said Special CP, Crime Branch of Delhi Police, Praveer Ranjan

The police said they have registered an FIR against unnamed persons in connection with the “toolkit”, which was shared by teen climate activist Greta Thunberg and others on Twitter, with a top official saying that the initial probe has suggested the document’s link with a pro-Khalistan group.

Delhi Police’s remarks come in the backdrop of global celebrities such as singer Rihanna and Thunberg supporting the farmers’ protests against the three farm laws.

Lending her support to the farmers’ agitation, the teen activist had shared “a toolkit for those who want to help”.

Greta’s tweets in support of the farmers’ protests against the three recently enacted farm laws are among many posts that have drawn international attention over the past two days.

Govt negotiating with farmers, says MEA in response to US statement

According to the sources the charges that the young activist now faces include “conspiracy” and “promoting enmity between different groups on grounds of religion, race, place of birth, residence, language... and acts prejudicial to maintenance of harmony”.

As the news of her being booked by the Delhi Police, Greta posted a new tweet saying: “I still #StandWithFarmers and support their peaceful protest. No amount of hate, threats or violations of human rights will ever change that. #FarmersProtest.”

Another day another mob of angry misogynists in my mentions

We stand in solidarity with the #FarmersProtest in India.
https://t.co/tqvR0oHgo0

I still #StandWithFarmers and support their peaceful protest.
No amount of hate, threats or violations of human rights will ever change that. #FarmersProtest

The teenager’s first tweet came on Tuesday night, soon after pop star Rihanna posted a one-line comment sharing a CNN story. “We stand in solidarity with the #FarmersProtest in India,” Greta wrote, sharing the same CNN story about the protests and the government restricting Internet near protest sites.

Today, the Swedish climate activist also shared a “toolkit” advising people on how to show support for the protests. Sources in Delhi Police said it “exposes the conspiracy by an organised overseas network” to instigate the farmer protests.

Here’s an updated toolkit by people on the ground in India if you want to help. (They removed their previous document as it was outdated.)#StandWithFarmers #FarmersProtesthttps://t.co/ZGEcMwHUNL

Abusing young women and children for supporting #FarmersProtest #IndianFarmersHumanRights is now become the symbol of this country. Shame!

Addressing a press conference, Special CP (Crime) Praveer Ranjan said the Delhi Police have come across a document “toolkit” which has an action plan to spread social disharmony in the country and registered a case against its author on charges of criminal conspiracy, sedition and others.

He said the initial probe has revealed that the ‘toolkit’ has been created by a pro-Khalistani organisation.

He said documents uploaded on social media have a proper action plan about a digital strike on or before January 26 and tweet storms on January 23.