Divide at UN over naming Russia aid resolution for Ukraine : The Tribune India

Divide at UN over naming Russia aid resolution for Ukraine

South Africa among 35 countries that abstained on resolution 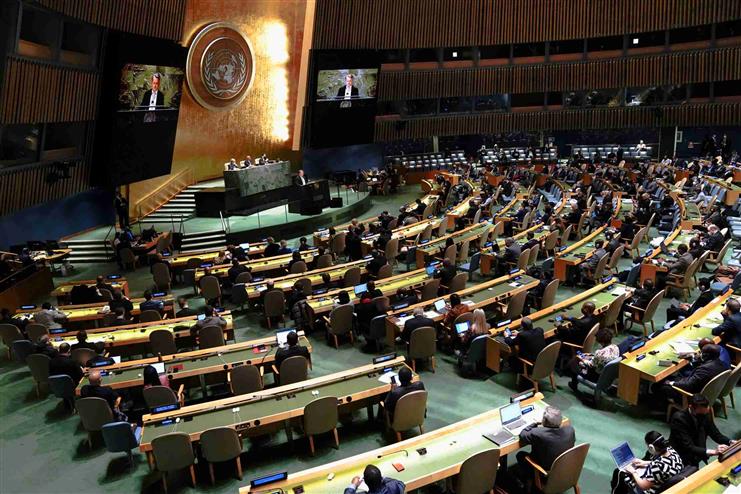 France and Mexico are pressing UN members to mention Russia's invasion in a resolution on the worsening humanitarian situation in Ukraine. But South Africa is arguing against that approach, saying that inserting political issues may block consensus on helping civilians.

A French-Mexican draft resolution expected to be considered this week by the 193-nation UN General Assembly reiterates the world body's March 2 demand for Russia to stop its military offensive in Ukraine and withdraw all its troops. It also demands the protection of all civilians and infrastructure indispensable to their survival.

The draft, obtained on Monday by The Associated Press, says the “dire humanitarian consequences” of Russia's aggression in Ukraine “are on a scale that the international community has not seen in Europe in decades.” It deplores Russia's shelling, airstrikes and besiegement of densely populated cities, particularly the southern city of Mariupol.

A rival South African draft resolution circulated later on Monday and also obtained by AP makes no mention of Russia. Instead, it calls for “an immediate cessation of hostilities” as a first step in ameliorating the humanitarian situation, refers to “all parties,” and encourages “political dialogue, negotiations, mediation and other peaceful means aimed at achieving lasting peace”.

The proposed South African resolution would recognise “the autonomy of humanitarian objectives from the political, economic, military or other objectives that any actor may hold with regard to areas where humanitarian action is being implemented”.

It would also demand protection for civilians and infrastructure indispensable to their survival, and “civilian infrastructure that is critical to enable the delivery of essential services in armed conflict”.

The General Assembly is expected to meet and vote on Wednesday on the French-Mexican resolution at Ukraine's request, assembly spokesperson Paulina Kubiak said on Monday night.

France and Mexico decided to seek a humanitarian resolution in the General Assembly after negotiating a similar resolution citing Russia's invasion of Ukraine for two weeks in the Security Council, where Russia made clear it would veto the measure.

Supporters of the French-Mexican resolution are hoping they will come close to the vote on the March 2 General Assembly resolution that demanded an immediate halt to Russia's military action and withdrawal of all its forces. That vote was 141-5, with 35 abstentions, and was hailed by the resolution's supporters as a demonstration of Russia's global isolation.

South Africa was among the 35 countries that abstained on that resolution.

In explaining the context for its proposed resolution on Monday, South Africa said the measure must express concern about the humanitarian situation in Ukraine and call on all parties to abide by international humanitarian law, which bans the targeting of civilians and civilian infrastructure, including hospitals, schools and water facilities.

It also said, “political issues that may lead to member states not agreeing to a text should be addressed elsewhere.”

The French-Mexican draft resolution begins by reiterating the opening words of the UN Charter, and would reaffirm the General Assembly's determination “to save succeeding generations from the scourge of war”.

It would also recall the charter's obligation that all UN member nations refrain from the threat or use of force against “the territorial integrity or political independence of any state”.

Both the French-Mexican draft and the proposed South African resolution would reaffirm the assembly's “commitment to the sovereignty, independence, unity and territorial integrity of Ukraine”.