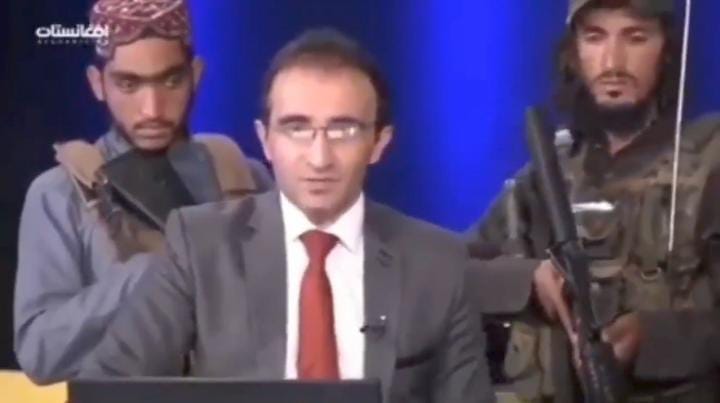 A video of a television anchor from Afghanistan surrounded by armed Taliban fighters asking his audience to not be afraid became one of the most widely shared clips on social media on Monday—a development that comes as the Taliban’s been trying to reform its image to project itself as more moderate even in the face of reports of brutality and violence from parts of the country.

The video shows an anchor trying to assuage the fears of a terrified and chaotic country that will now have to resign itself to the new leadership. What’s striking about the clip is that the anchor is visibly petrified as he sits surrounded by a group of Taliban gunmen.

“With armed Taliban fighters standing behind him, the presenter of Afghan TV's Peace Studio political debate programme says the Islamic Emirate (Taliban's preferred name) wants the public to "cooperate with it and should not be afraid,” BBC’s Kian Sharifi, who shared the 42-second clip, tweeted.

Rockets fired at Kabul airport amid US withdrawal hit homes

The video appears to represent exactly what critics are afraid might be unleashed on the country once the western forces, in the very last stage of their complete pullout, leave the country. Already, there are reports of brutality in some parts of the country.

Most Americans killed in Kabul airport attack were '9/11 babies'

A reporter from Tolo News and a cameraman were assaulted by Taliban fighters while they were reporting in Kabul.

The DW has quoted Reporters Without Borders (RSF) as saying there were seven recorded incidents of attacks against journalists since the Taliban sweep to power.

With armed Taliban fighters standing behind him, the presenter of Afghan TV's Peace Studio political debate programme says the Islamic Emirate (Taliban's preferred name) wants the public to "cooperate with it and should not be afraid".pic.twitter.com/rclw3P9E7M

The Taliban’s quick sweep to power in the face of a weak resistance from Afghan forces has taken many by surprise. Since taking over, the Taliban, whose hardline enforcement of the Sharia law in their previous reign from 1996 to 2001 had been particularly brutal to women and minorities, have tried to soften their image. They’ve promised freedom of the press “within their cultural framework”, asked government employees to return to work, and promised to safeguard the rights of women “within the Islamic laws”, but many continue to view such promises with scepticism and fear that conditions could likely decline after the US August 31 deadline for a complete troop pullout.

This is surreal. Taliban militants are posing behind this visibly petrified TV host with guns and making him to say that people of #Afghanistan shouldn’t be scared of the Islamic Emirate. Taliban itself is synonymous with fear in the minds of millions. This is just another proof. pic.twitter.com/3lIAdhWC4Q