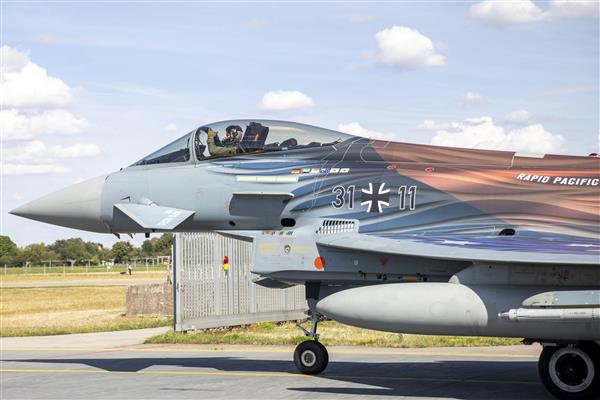 A group of German air force fighter jets landed in Singapore on Tuesday as part of a marathon bid to fly them some 12,800 kilometers (8,000 miles) from their home base to Southeast Asia in just 24 hours.

The exercise comes at a time of heightened tensions between China and the U.S. and its allies over Taiwan and demonstrates the ability for a European nation to move air power quickly to the region.

The European Union unveiled a new strategy in September for boosting economic, political and defense ties in the Indo-Pacific. German Defense Minister Christine Lambrecht told reporters that despite the war in Ukraine being a priority at the moment, the Eurofighter mission underscores that Asia has not been forgotten.

“We are at the side of all of those who stand for our values such as democracy, freedom and security, and are also willing to contribute,” she said as the aircraft took off from Neuburg, Germany, on Monday, the dpa news agency reported.

“Our focus at the moment is naturally on the eastern flank, for which Russia's brutal war of aggression is to blame, but we also have to keep an eye on other regions.”        Part of the EU's new strategy for the Asia-Pacific is focused on improving maritime security and ensuring safe passage through sea lanes, and several European nations have sent naval assets to the region for maneuvers this year.

As China has grown more assertive in the region, the United States, Britain and others have also made it increasingly a priority.

Germany sent the frigate Bayern to the region on a nearly seven-month deployment that wound up earlier this year, the first time a German warship had been in the Indo-Pacific for nearly two decades. It took part in joint exercises with allies including Australia, Singapore, Japan and the United States, and was denied a port call in China.

The six multirole Eurofighter jets involved in the current exercise were accompanied by four transport aircraft and three tankers. They were refueled in-air along the lengthy flight, and also made stops along the way for refueling, inspection and rotations of pilots.

During a stop at a base near Abu Dhabi, United Arab Emirates, on Tuesday, Germany's air force, the Luftwaffe, said that two of the Eurofighters were found to have technical problems. One was fixed on site but the other had a defect in its hydraulics system so was held back.

The Luftwaffe said personnel were sent from Germany to repair it further so that it would be available for upcoming exercises in Australia, where all the aircraft are heading after Singapore.

The so-called Pitch Black exercise is bringing together some 2,500 personnel and 100 aircraft from around the globe for three weeks in Australia's Northern Territory.

In addition to Germany, European NATO members France, Britain and the Netherlands are participating, along with the United States, New Zealand, Korea, the UAE, India, Japan, Thailand and others.

The exercise is designed to test and improve multinational force integration, and “recognize Australia's strong relationships and the high value we place on regional security and fostering closer ties throughout the Indo-Pacific region,” the Royal Australian Air Force said.

Following the August 19-September 8 exercise in Australia, the German jets are to stop in Japan and South Korea on their way back home. AP