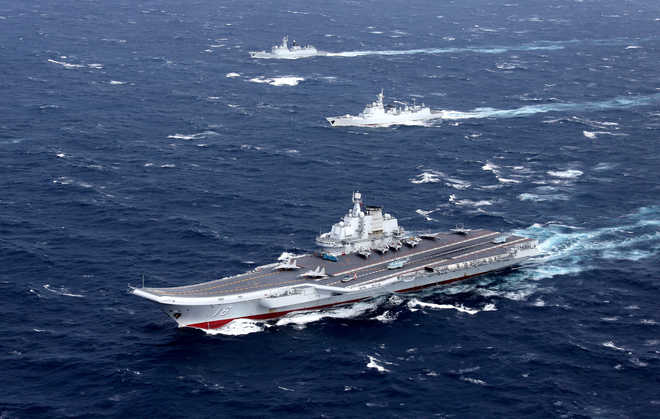 China on Tuesday asked the Philippines to stop the “megaphone diplomacy” over its claims on a reef in the disputed South China Sea and said its officials should have “basic manners” and stop insulting remarks after Manila’s top diplomat termed Beijing an “ugly oaf”.

Reports from Manila on Tuesday said the Philippines foreign secretary Teodoro Locsin Jr has apologised for using an obscene phrase, demanding China to get out of the Whitsun Reef which Beijing claims as its own.

The Philippines news portal GMA News reported that Locsin Jr has apologised to the Chinese government for spewing profanity in a tweet blasting the presence of Chinese ships in the West Philippine Sea.

In a separate tweet Locsin Jr, while referring to the news of his apology said, “To my friend (Chinese Foreign Minister) Wang Yi only. Nobody else.”

Locsin’s outburst came after Manila urged Beijing to recall hundreds of Chinese vessels lingering near Whitsun Reef, part of the South China Sea claimed by both the countries.

The Department of Foreign Affairs in Manila said in a statement on Monday that “China has no law enforcement rights in these areas...the unauthorised and lingering presence of these vessels is a blatant infringement of Philippine sovereignty”.

China claims most of the South China Sea. The Philippines, Vietnam, Malaysia, Brunei and Taiwan have counterclaims.

In a strict rejoinder to Locsin Jr, Chinese Foreign Ministry spokesman Wang Wenbin in a statement here said facts have proven time and time again that “megaphone diplomacy” can only undermine mutual trust rather than change reality.

“We hope that certain individuals from the Philippine side will mind basic manners and act in ways that suit his status,” Wang said.

He made the remarks in response to a query about a statement issued by the Philippine Department of Foreign Affairs on Monday, which protested against Chinese Coast Guard vessels’ patrols in waters off the Huangyan Island, the Chinese name for Scarborough Shoal.

Wang said the Huangyan Island is China’s territory and its adjacent waters are under China’s jurisdiction.

Quoting the Philippines President Rodrigo Duterte’s remarks that differences and disputes between the two countries on some issues should not affect the overall friendship and cooperation, Wang said it is also an important consensus reached by China and the Philippines on many occasions, state-run Xinhua news agency reported.

“China has always been and will remain committed to properly handling differences and advancing cooperation with The Philippines through friendly consultation, and will continue to provide assistance within its capacity to the Philippines in its efforts to fight the epidemic and resume economic development,” Wang said.

The Philippine government says the reef is within an internationally recognised offshore zone where Manila has exclusive rights to exploit fisheries, oil, gas and other resources.

An international arbitration tribunal in 2016 ruled mostly in favour of the Philippines based on the 1982 UN Convention on the Law of the Sea and invalidated China’s claims to virtually the entire South China Sea on historical grounds.

China which had declined to take part in the arbitration rejected the ruling and continued its massive military and civilian build up in the South China Sea to assert its claims. PTI