Holocaust survivor and ‘Happiest Man on Earth’ author dies at 101 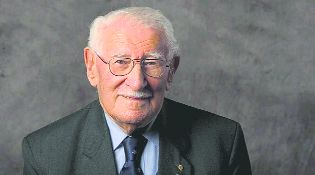 Holocaust survivor Eddie Jaku, who last year published his best-selling memoir, "The Happiest Man on Earth", died in Sydney on Tuesday, a Jewish community leader said. He was 101.

Paying tribute to Jaku, Prime Minister Scott Morrison said, “He will be sadly missed, especially by our Jewish community. He was an inspiration and a joy.”

Jaku was born Abraham “Adi” Jakubowiez in April 1920 in the German city of Leipzig. His parents and many of his wider family did not survive the war.

He was tossed out of school in 1933 at the age of 13 because he was Jewish, but managed to finish his high school education in another city under an alias in 1938 with a qualification in precision engineering. Jaku said his qualification spared him the gas chambers in the years that followed because he worked as a slave labourer. He was sent to and escaped from concentration camps, including Buchenwald and Auschwitz, where his parents were gassed. Jaku said with the birth of his first son Andre, “I realised I was the luckiest man on Earth.” — AP