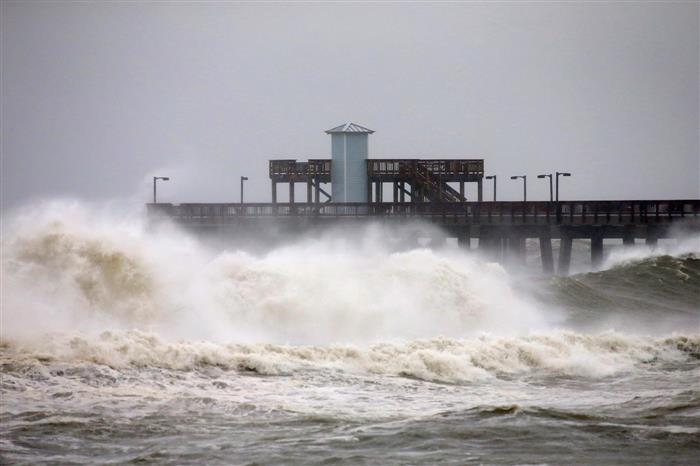 Waves crash along a pier as Hurricane Sally approaches in Gulf Shores, Alabama, US, on September 15, 2020. Reuters file

Hurricane Sally moved slowly closer to the US Gulf Coast on Tuesday, threatening historic floods as rain and storm-force winds started lashing the shore, and governors of four states urged people to flee the coastline.

Sally could hit the Alabama, Florida and Mississippi coasts on Tuesday night or early Wednesday causing massive flash flooding and storm surges of up to 7 feet (2 meters) in some spots, the National Hurricane Center (NHC) said.

Its languid pace recalls 2017’s Hurricane Harvey, which dumped several feet of rain over a period of days on the Houston area, causing major damage.

More than 2 feet of rain was expected in some areas, with “extreme life-threatening flash flooding likely through Wednesday,” an NHC forecaster said.

About half the 38 rooms had guests, and the hotel was stocked with flashlights, batteries, bottled water and canned food, she said.

“The wind has definitely picked up and some of the streets are starting to flood. I definitely wouldn’t go outside unless you had to.”

Sally will slow even more after landfall, causing Atlanta to see as much as 6 inches (15 cm) of rain through Friday, said Jim Foerster, chief meteorologist at DTN, an energy, agriculture and weather data provider. “It’s going to be a catastrophic flooding event” for much of the southeastern United States, Forester said, with Mobile to the western part of the Florida Panhandle taking the brunt of the storm.

Damage from Sally is expected to reach $2 billion to $3 billion, said Chuck Watson of Enki Research, which models and tracks tropical storms. That could rise if the storm’s heaviest rainfall happens over land instead of the Gulf. By mid-afternoon, Panama City, Florida, had received 5 to 6 inches of rain, while offshore totals were around 11 inches, Watson said.

Governors from Louisiana to Florida warned people to leave low-lying communities and Mobile County Sheriff Sam Cochran told residents of flood-prone areas that if they choose to ride out the storm, it will be “a couple of days or longer before you can get out.”

The causeway to Dauphin Island, Alabama, at the entrance to Mobile Bay was already flooded and impassable by Tuesday morning, the mayor said.

Coastal roads in Pascagoula, Mississippi, were flooding and some electrical wires were down, according to photos and social media posts from the police department, which asked people to respect road barricades and “refrain from joy riding.”

Nearly 11,000 homes are at risk of storm surge in the larger coastal cities in Alabama and Mississippi, according to estimates from property data and analytics firm CoreLogic.

Steady winds and bands of rain had started to arrive in Gulf Shores, Alabama, by Tuesday morning. Samantha Frederickson, who moved recently to Gulf Shores, hit the beach to catch a view of the storm surf. “When it gets to the point we don’t feel comfortable, we’ll take off,” she said.

Ports, schools and businesses closed along the coast. The US Coast Guard restricted travel on the lower Mississippi River from New Orleans to the Gulf, and closed the ports of Pascagoula and Gulfport, Mississippi, and Mobile.

More than a quarter of US offshore oil production was shut.

Sally is the 18th named storm in the Atlantic this year and will be the eighth tropical storm or hurricane to hit the United States - something “very rare if not a record” said Dan Kottlowski, senior meteorologist at AccuWeather, noting that accurate data on historic tropical storms can be elusive.  The NHC is tracking four named storms in the Atlantic basin. Reuters