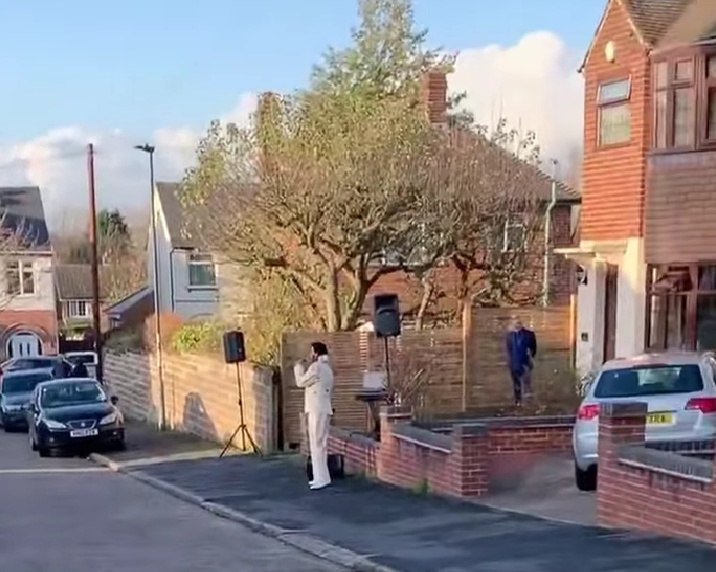 An Indian-origin singer’s impromptu street performances to entertain his neighbours in eastern England during the COVID-19 lockdown has attracted widespread praise, including from the local police unit.

Bal Johal has run a popular tribute act in memory of American singer-actor Elvis Presley for many years and more recently began stepping out of his home at Chellaston in Derbyshire in his full Elvis gear to perform the musician’s world-famous hits such as ‘Burning Love’ and ‘All Shook Up’ for some light relief during the lockdown.

“They were shocked and surprised, pleasantly surprised,” Johal told the BBC about his neighbours’ reaction to his street-side gigs.

“I was gigging, going around and then when you go to the place again, they were already saying: ‘Oh, Indian Elvis is coming tonight’. So, I just adopted the name,” he recalls.

Johal says that it is the legendary singer’s music that has helped through the tough pandemic months and “kept him going”.

“I love the guy (Presley); like an older brother,” he says, in reference to his musical icon.

The Derbyshire Armed Response Unit shared a video of one of Johal’s street performances on Twitter recently, praising the socially-distanced performance.

“Just a normal day In Chellaston, and we spot Indian Elvis entertaining his street. Great to see the community out and enjoying a (socially distanced) Sunday afternoon. They’ll be no ‘Jailhouse Rock’ today though,” the post read, resulting in nearly 10,000 views of the video.

As his touring with the tribute act performances across various venues came to a halt with the lockdown, Johal has turned towards taking requests from his neighbours instead.

A Facebook post from one his neighbours reads: “Thank you so much to Bal Johal who sang for mum on her birthday yesterday, it was absolutely fabulous!”        Johal, who has been an Elvis tribute act since the early 1990s, told ‘Derbyshire Live’: “It’s been brilliant to see the video. It was so funny because when I saw the police and the flashing lights I thought ‘oh no I could be in trouble’.

“It’s always a privilege to sing Elvis songs.”   And his wife Jas added: “A neighbour’s mum was having a 75th birthday celebration and Bal played out a few tunes. There was such a good atmosphere and everyone was socially distanced.

“The police car even turned up and officers wanted a photo with him. Since the lockdown everybody here has been so supportive, we are all friends now.” --- PTI

Just a normal day In Chellaston, and we spot Indian Elvis entertaining his street. Great to see the community out and enjoying a (socially distanced) Sunday afternoon.
They’ll be no “Jailhouse Rock” today though. pic.twitter.com/zmWwOZF5v8