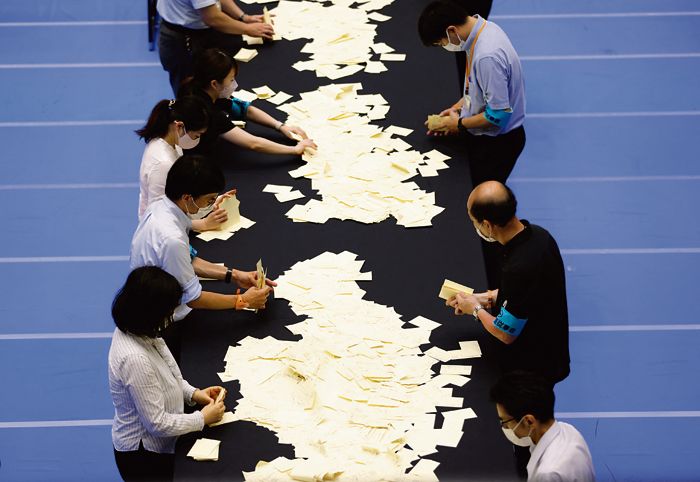 Japanese voted on Sunday in the shadow of the assassination of former Prime Minister Shinzo Abe that brought heightened security as party leaders avoided mingling with crowds and delivered messages of upholding democracy and free speech during campaigning the day before.

Exit polls for the election for the Parliament’s upper house showed Abe’s governing party certain to win a major victory, possibly propelled by what is seen as a wave of sympathy votes in a country still reeling from the shock of Friday’s brazen shooting.

We absolutely refuse to let violence shut out free speech. We must demonstrate that our democracy and election will not back down on violence. —Fumio Kishida, Prime Minister

Also Sunday, police in western Japan sent the alleged assassin to a local prosecutor’s office for further probe. A top regional police official acknowledged possible security lapses that allowed the attacker to get so close and fire a bullet at the still-influential former Japanese leader.

Exit polls by a public broadcaster and other media showed the governing Liberal Democratic Party was certain to secure a single majority of 125 seats, or half of the upper house, the less powerful of the two chambers. It’s a major boost for PM Fumio Kishida, who stands to rule without interruption until a scheduled election in 2025.

In the wake of Abe’s assassination, Sunday’s election had a new meaning, with all political leaders emphasising the importance of free speech and their pledge not to back down on violence against democracy.

On the final day of campaigning Saturday, party leaders avoided fist-bumps — a Covid-19 alternative to handshakes — or other close-proximity friendly gestures they used to enjoy with the public.

Abe was shot in Nara on Friday and airlifted to a hospital, but died of blood loss. Police arrested a former member of Japan’s navy at the scene and confiscated a homemade gun. Several others were found at his apartment. The suspect, Tetsuya Yamagami, said he acted because of Abe’s rumoured connection to an organisation that he resented, police said, but had no problem with the leader’s political views. — AP