Big Hit valued at about $8.4 billion at debut price; Billboard-topping BTS accounted for 88% of label's sales in H1 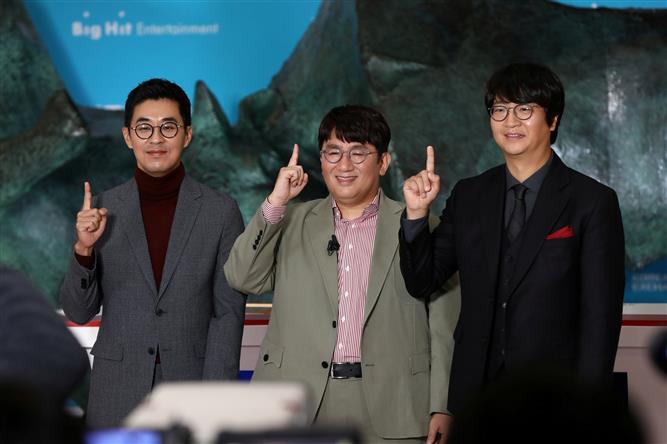 Bang Si-hyuk, founder of Big Hit Entertainment Co., (C) poses for a photograph with company’s executives during the company’s initial public offering ceremony at the Korea Exchange in Seoul, South Korea, on October 15, 2020. Pool via Reuters

Big Hit, which relies heavily on the boy band for revenue, opened at 2,70,000 won and was trading at 4% above the offer price by late morning as investors sought a piece of the country's largest listing in three years.

The listing helps revive the country's IPO activity this year after two subdued years, with volumes rising 51% to $2.9 billion so far this year, compared with the same period last year, according to Refinitiv data.

The Big Hit float also made the seven members of BTS instant multimillionaires with each granted shares worth 18.5 billion won ($16 million) at the debut price.

The Billboard Chart topping group, which has a huge global following, accounted for 87.7% of the label's revenue in the first half of 2020, according to a regulatory filing.

Analysts say the company has proved itself extremely online savvy, using Youtube and social media for market infiltration since in-person performances were cancelled because of the coronavirus pandemic.

BTS' first paid online concert in June earned a Guinness World Records title for most viewers for a livestreamed performance, with a 7,57,000-strong audience from 107 countries.

The label also has an unprecedented level of control over its revenue streams via its Weverse fandom platform that distributes BTS content and sells merchandise, which has the potential to draw in other artists.

The listing ceremony at the Korea Exchange (KRX), attended by Big Hit founder and co-CEO Bang Si-hyuk, was broadcast live on the label's Youtube channel.

"Big Hit has a different business model than the other big three K-Pop labels, JYP, SM and YG

," said Nam Hyo-ji, analyst at KTB Investment & Securities. "Although not completely free from the effect of COVID-19, it's freer than other labels."

Thursday's listing coincides with the US Billboard Music Awards taking place in Los Angeles, where BTS won the first of two awards it was nominated for - Top Social Artist.

Back home, calls are mounting for BTS members to be granted alternatives or delays to South Korea's mandatory military service, with some lawmakers and fans arguing they are doing plenty for their country without wearing a soldier's uniform.

Under general rules, the eldest member of the band will be required to sign up by the end of next year, with the remaining six over the following five years. Reuters