The flight took off minutes after the Kabul airport suicide attack 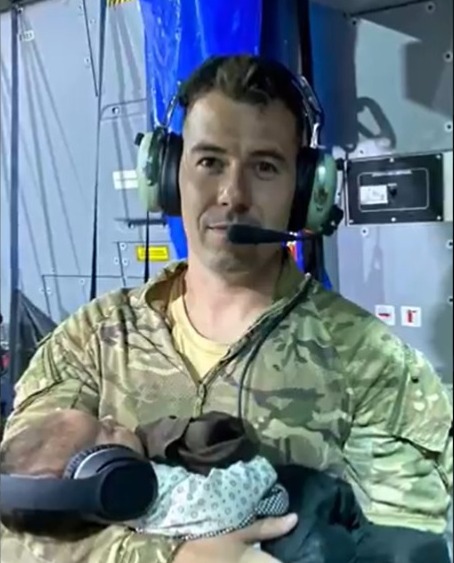 Meet Royal Air Force Sergeant Andy Livingstone. The 31-year-old British airman who was among those evacuating both their own as well as Afghans in the chaotic troop pullout has quite unexpectedly found a photo of himself cradling an Afghan baby on one of the evacuation flights going viral.

The photo was taken on a flight that took off from Kabul hours after a suicide attack targeted evacuation efforts.

The viral photo shows Livingstone, an air loadmaster on the A400M aircraft, holding a two-week-old baby who has on pair of ear defenders to muffle out the aircraft noise.

Livingstone told Sky News he spotted family—a man, his wife, and their four children, the baby among them—when they boarded his RAF transport plane just hours after the attack at Kabul airport. The flight would take them to the United Arab Emirates, where they would board another flight to the United Kingdom.

Livingstone’s job as an air loadmaster was to help straplines of frightened Afghan refugees into their places on the plane and look after them during the initial flight.

"Already I had my eye on that family, making sure they're going to be looked after for the next few hours," Sergeant Livingstone told Sky News. "Then out the corner of my eye I see something drop on the floor and as I look over, bless her, this woman is picking up her two-week-old child.”

It happened again after he helped strap them more securely, he said.

"At that point, it was just the only thing I could think of to do was just plead with the family to let me take the baby for half an hour or however long they'd let me just so she could have enough sleep to gain a little bit more energy to hold her baby," he said.

Livingstone, a father to two young girls back home, says in the Sky News Interview: “"You're holding a baby that weighs nothing—absolutely nothing—it was two weeks old and you think: how exhausted must this poor woman be to not be able to carry her own child? It's a basic instinct and she just couldn't do it anymore and it was an awful thing to see but a privilege to be able to help".

"You could see all of them were exhausted."

RAF sergeant describes how he cradled a two-week-old Afghan baby on a UK evacuation flight from Kabul to let the exhausted mother rest.