Kremlin says it will seek information from military about hospital bombing : The Tribune India

Kremlin says it will seek information from military about hospital bombing 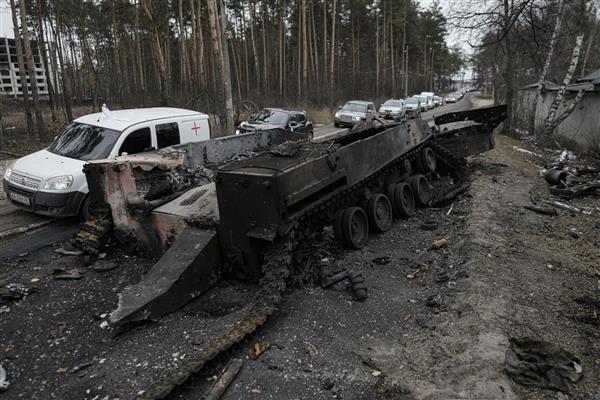 Cars drive past a destroyed Russian tank as a convoy of vehicles evacuating civilians leaves Irpin, on the outskirts of Kyiv, Ukraine, on Wednesday. AP/PTI photo

The Kremlin said on Thursday it would seek information from the Russian military after Ukraine accused Russia of bombing a children's hospital in the besieged city of Mariupol.

"We will definitely ask our military, because you and I don't have clear information about what happened there," Kremlin spokesman Dmitry Peskov told a briefing. "And the military are very likely to provide some information." Peskov also told reporters that Ukraine was kept proposing talks between Ukrainian President Volodymyr Zelenskyy and his Russian counterpart Vladimir Putin.

"Kyiv is constantly making such offers to us," he said, adding that so far contacts have been elevated to foreign minister level—Ukraine's Dmytro Kuleba and Russia's Sergei Lavrov were meeting in Turkey as he spoke.

"Let us wait for the results and see what they agree on," Peskov said when asked if a top-level meeting was possible.

Use of 2 trained animals demonstrated during ongoing exercis...