UK capital has experienced moderate air pollution since the weekend as a result of continuing cold, still, and foggy conditions creating poor dispersion of vehicle emissions 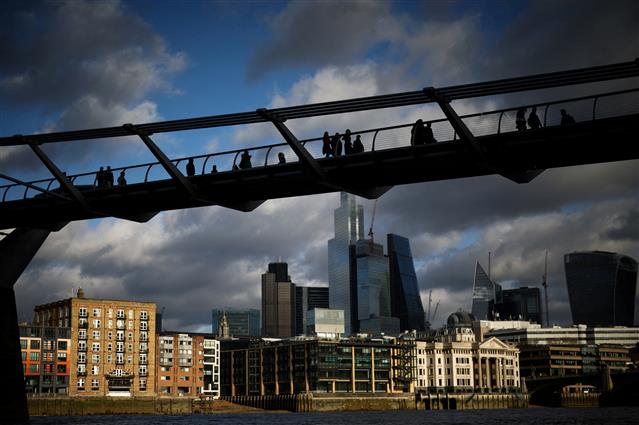 People walk over the Millennium Bridge with the City of London financial district in the background. Reuters file

Mayor of London Sadiq Khan issued a high air pollution alert for Tuesday and called on Londoners “to be careful over the next few days” and avoid unnecessary car journeys.

The UK capital has experienced moderate air pollution since the weekend as a result of continuing cold, still, and foggy conditions creating poor dispersion of vehicle emissions.

Pollution alert messages will be displayed across the Transport for London (TfL) public transport network and schools in the city will also be notified as part of actions planned by the Mayor’s office.

“On Tuesday, alongside the extreme cold temperatures we’ve been experiencing, we are also expecting high levels of air pollution,” said Khan.

“We know how dangerous toxic air is for Londoners – that’s why I’m doing everything in my power to tackle it,” he said.

“We all need to be careful over the next few days. I’m urging Londoners to look after each other by choosing to walk, cycle or take public transport where possible, avoiding unnecessary car journeys, stopping engine idling and not burning garden waste, all of which contributes to high levels of pollution. This is particularly important in order to protect those who are more vulnerable to high pollution,” he added.

The London Mayor’s air pollution forecasts are issued by Imperial College London as combined forecasts based on a number of public forecasts, including the government’s Department for Environment, Food and Rural Affairs (Defra) and the Meteorological Office.

The Mayor’s office said London has the “world’s largest air quality monitoring network”, which provides free live and archived air quality data to anyone who wants it as well as supporting pollution forecasting and London’s air quality alert service.

The ULEZ, targeting the most polluting vehicles with a daily surcharge, is set to be expanded London-wide from August this year as part of measures to clamp down on the city’s air pollution.

Under the ULEZ scheme, introduced in 2019, drivers are charged 12.50 pounds to enter the area within London’s north and south-circular orbital roads, to be applied to all London boroughs from later this year.