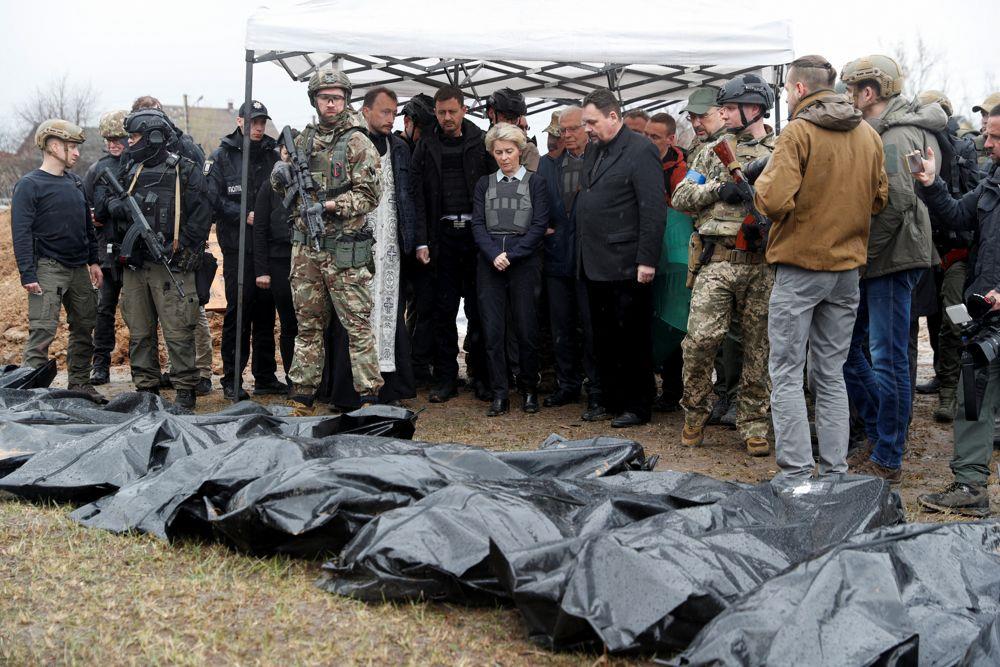 European Commission president Ursula von der Leyen along with other Ukraine officials next to a mass grave in Bucha. REUTERS

A rocket attack on a packed train station at Kramatorsk in Ukraine used to evacuate civilians killed over 50 persons on Friday. The Ukrainian authorities said more than 100 were injured in the attack.

A commander from the self-proclaimed Donestsk People's Republic in eastern Ukraine said the missile attack was a Ukrainian "provocation", the TASS news agency reported.

Russia's Defence Ministry denied that Russian forces were responsible for a missile strike on a railway station, the RIA news agency reported. It said the missile was of a type used only by the Ukrainian military, and similar to one that hit the centre of the city of Donetsk on March 14, killing 17 persons, RIA reported.

Hours after warning that Ukrainian forces already had found worse scenes of brutality in a settlement north of Kyiv, President Volodymyr Zelenskyy said “thousands” of people were at the station in Kramatorsk, a city in the eastern Donetsk region, when it was hit by a missile.

Zelenskyy accompanied a social media post with photos that showed a train car with smashed windows, abandoned luggage and bodies lying in what looked like an outdoor waiting area. Authorities said the strike wounded more than 100 persons.

“The inhuman Russians are not changing their methods. Without the strength or courage to stand up to us on the battlefield, they are cynically destroying the civilian population," the President said. "This is an evil without limits. And if it is not punished, then it will never stop.” — AP