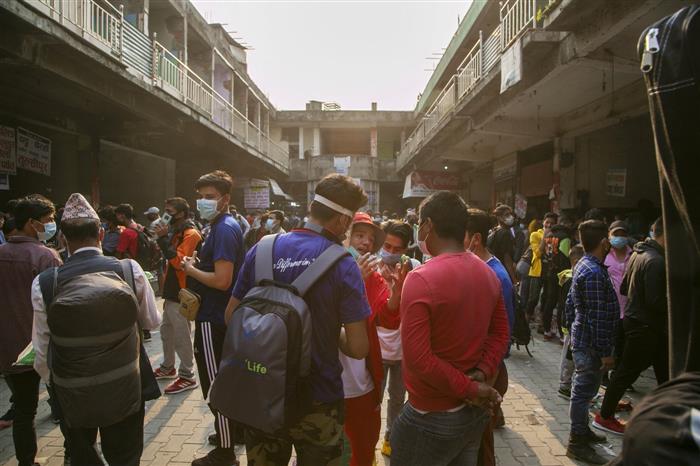 The Bill that defines the entitlement for Citizenship based on marital grounds and ensures non-voting Citizenship to non-resident Nepalis living in non-SAARC countries has come under criticism from some quarters of the society, citing it did not prevent foreign women marrying Nepali men from getting citizenship easily. AP/PTI file

Nepal President Bidya Devi Bhandari has refused to sign within the stipulated deadline a key Bill to amend the Nepal Citizenship Act, which was endorsed twice by both the houses of Parliament, a move described by constitutional experts as a serious blow to the Constitution.

A senior official at the President’s Office Bhesh Raj Adhikari said that the Bill was not signed as of midnight on Tuesday—the deadline to authenticate the bill re-endorsed by both the House of Representatives and the National Assembly—after the President earlier sent it back noting that the Parliament required to reconsider the Bill as per the Constitution.

Speaker Agni Prasad Sapkota, who had on September 5 recertified the amendment Bill, sent it to Bhandari for authentication.

The President, however, did not clear the Bill within the 15-day timeline given by the Constitution for certification.

The second amendment to the Citizenship Act was aimed at addressing concerns of the Madhesh-centric parties and the Non-resident Nepali Association.

The rejection of the Bill has affected at least half a million stateless people waiting for its passage to get their national identity cards.

The Bill that defines the entitlement for Citizenship based on marital grounds and ensures non-voting Citizenship to non-resident Nepalis living in non-SAARC countries has come under criticism from some quarters of the society, citing it did not prevent foreign women marrying Nepali men from getting citizenship easily.

“Now we are facing a deep constitutional crisis. The President cannot go against the Parliament. It is the duty of the president to authenticate the bill passed by the parliament. The whole constitutional process has now been derailed,” Tripathi said, adding that “only the supreme court” had the power to interpret the Constitution, not the President.

A provision in Article 113 (4) of the Nepal Constitution states that the President must certify the bill if it was re-sent for authentication.

The Bill, which was sent for authentication for the first time on August 1, was earlier returned to the parliament for reconsideration.

However, both the Houses of parliament re-endorsed the Bill without making any changes and sent it again to the President.

According to the President’s Office, Bhandari’s move is in line with the Constitution.

Political parties are also divided as the ruling coalition of the Nepali Congress—the CPN (Maoist Centre), the CPN (Unified Socialist), the Janata Samajbadi Party, and the Rashtriya Janamorcha, apart from the Loktantrik Samajbadi Party—are in favour of the bill, while the main-opposition CPN-UML party backing the President’s call for its thorough review.

Communist Party of Nepal (Unified Marxist–Leninist) (CPN-UML), expressing reservation against the bill, said it was not in the interest of the country.

Legal experts said the President had no right to reject the decision of the executive and the Parliament, tantamounting to a “pocket veto”.

“If the Bill creates any problem, all the blame will go to the political parties and the government.”

The Supreme Court’s constitutional bench can, however, issue a mandamus to the President if someone registers a writ petition, forcing her to authenticate the Bill.

A Bill, passed by both the houses of Parliament, becomes a law only after it gets the presidential signature.

Legal experts, political leaders, and analysts in condemnation of the President’s action said it would set a wrong precedent and do irreparable harm to the Constitution.

Former Supreme Court Justice Balaram KC said: “As per the constitution, she can only send the bill back to the House of Representatives for a review, which she did. Now she has only two options — either to sign it or resign.”

“The Constitution does not allow the President to refuse to authenticate the Bill,” said Upendra Yadav, chairperson of the Janata Samajbadi Party, a constituent of the ruling coalition.

“If she does not act according to the Constitution, the alliance will decide its further step at its meeting on Wednesday.”

Minister Bahadur Bishwakarma, a leader of the Nepali Congress, said the President’s refusal to authenticate the bill was an “unnatural conduct” by the head of State and a clear violation of the Constitution.

“When the President, Vice President, or members of a constitutional body violate the Constitution, they can be impeached. However, the option of impeachment is out of the question now as the Parliament’s tenure has just ended,” Bishwakarma told Kathmandu Post.

Jitendra Sonal, a leader of the Loktantrik Samajbadi Party (LSP), said his party would launch street protests if the President had indeed refused to authenticate the citizenship Bill.