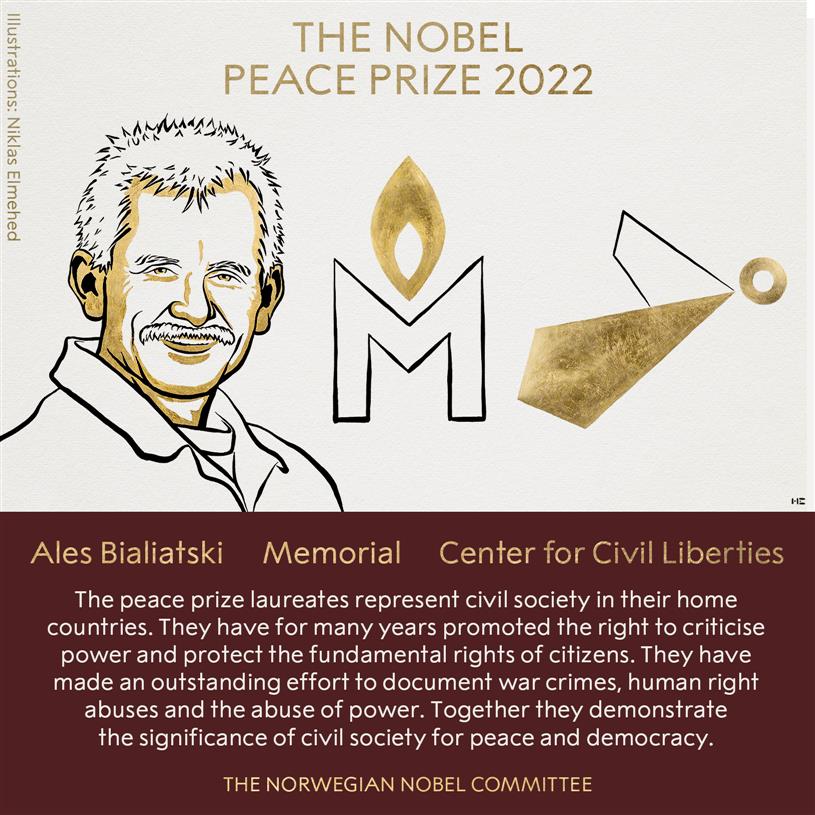 She called on Belarus to release Byalyatski from prison.

The prize will be seen by many as a condemnation of Russian President Vladimir Putin, who is celebrating his 70th birthday on Friday, and Belarus President Alexander Lukashenko, making it one of the most politically contentious in decades.

The award was not an anti-Putin prize, however, Reiss-Andersen said.

Belarusian security police in July last year raided offices and homes of lawyers and human rights activists, detaining Byalyatski and others in a new crackdown on opponents of Lukashenko.

Authorities had moved to shut down non-state media outlets and human right groups after mass protests the previous August against a presidential election the opposition said was rigged.

The prize will boost morale for Byalyatski and strengthen the hand of the Center for Civil Liberties, an independent Ukrainian human rights organisation, which is also focused on fighting corruption, he said.

"Although Memorial has been closed in Russia, it lives on as an idea that it's right to criticize power and that facts and history matter," Smith added.

The award is recognition for the whole Belarusian people in standing up to Lukashenko, opposition spokesman Franak Viacorka said.

He told Reuters that Byalyatski was jailed in inhuman conditions and he hoped the prize, shared with Russian and Ukrainian human rights organisations, would lead to his release.

"That's a huge sign of recognition for the Belarusian people, because the Belarusian people deserves it for their bravery in countering the tyranny of Lukashenko .... they deserve all the prizes in the world," said Viacorka, chief of staff to exiled Belarusian opposition leader Sviatlana Tsikhanouskaya who is a close friend of Byalyatski.

The Nobel Peace Prize, worth 10 million Swedish crowns, or about $900,000, will be presented in Oslo on Dec. 10, the anniversary of the death of Swedish industrialist Alfred Nobel, who founded the awards in his 1895 will.

"The Peace Prize laureates represent civil society in their home countries. They have for many years promoted the right to criticise power and protect the fundamental rights of citizens," the Norwegian Nobel Committee said in its citation.

"They have made an outstanding effort to document war crimes, human right abuses and the abuse of power. Together they demonstrate the significance of civil society for peace and democracy."