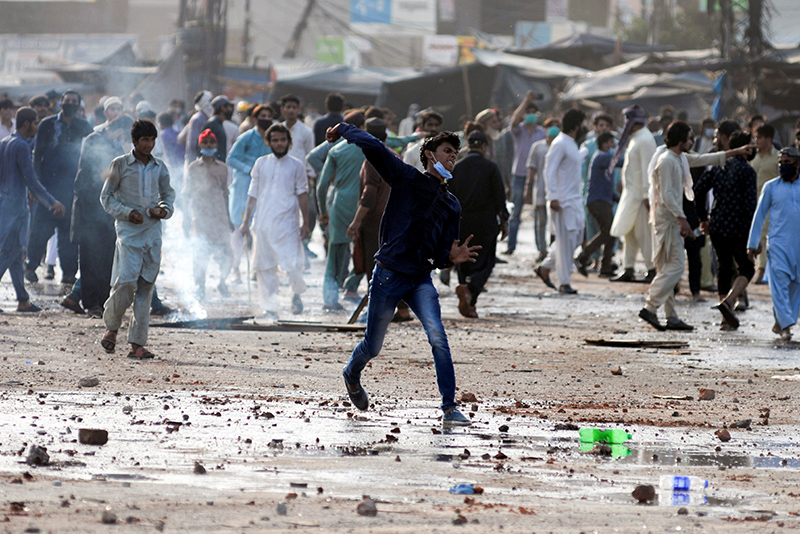 A supporter of the Tehreek-e-Labaik Pakistan (TLP) Islamist political party hurls stones towards police (not in picture) during a protest against the arrest of their leader in Lahore, Pakistan April 13, 2021. REUTERS

Paramilitary forces deployed overnight in the eastern Pakistani province of Punjab as police struggled to clear violent sit-ins by Islamists protesting against the arrest of their leader.

Two police officers were killed and 125 policemen were hurt in clashes with protesters in Lahore, Punjab's capital, the city's police chief Ghulam Mehmood Dogar said on Wednesday during a visit to a hospital treating the injured.

The protests were called by Tehrik-i-Labaik Pakistan (TLP), a hardline Islamist group that has made the denunciation of blasphemy against Islam its rallying cry. Their leader Saad Rizvi was arrested in Lahore on Monday ahead of the demonstrations.

On Tuesday, Rizvi was charged with instigating the murder of a police constable, who authorities say was kidnapped by protesters and later beaten to death.

Major roads across the country were blocked by the protesters on Monday and Tuesday, but by Tuesday evening police had been able to clear most of the crowds, except in Lahore.

Local news outlets reported similar incidents of protesters overpowering police in other cities, as did videos shared on social media that Reuters could not independently verify.

In one, a police officer with a bloodied face is frog-marched along a road by protesters. In another, a group of officers are seated on the ground surrounded by protesters, with one bleeding and appearing to be badly injured.

The TLP group blocked one of the main roads into the capital late last year and called off their protest only after the government signed a deal with them, agreeing to endorse a boycott of French products.

At the time, protests had broken out in several Muslim countries over France's response to the killing of a teacher who showed cartoons mocking the Prophet Mohammad to pupils during a civics lesson.

For many Muslims, depictions of the Prophet are blasphemous.

The group's agreement with the government was revised earlier this year, extending to April 20 the deadline for a parliamentary resolution to expel the French ambassador, when the group had plans to hold countrywide rallies.

Pakistan's parliament in October condemned the display of images in France of the Prophet Mohammad, urging the government to withdraw its ambassador from Paris. Reuters