Imran Khan-led PTI criticises move and terms it a 'regressive and condemnable act' of the government led by PM Shehbaz Sherif. 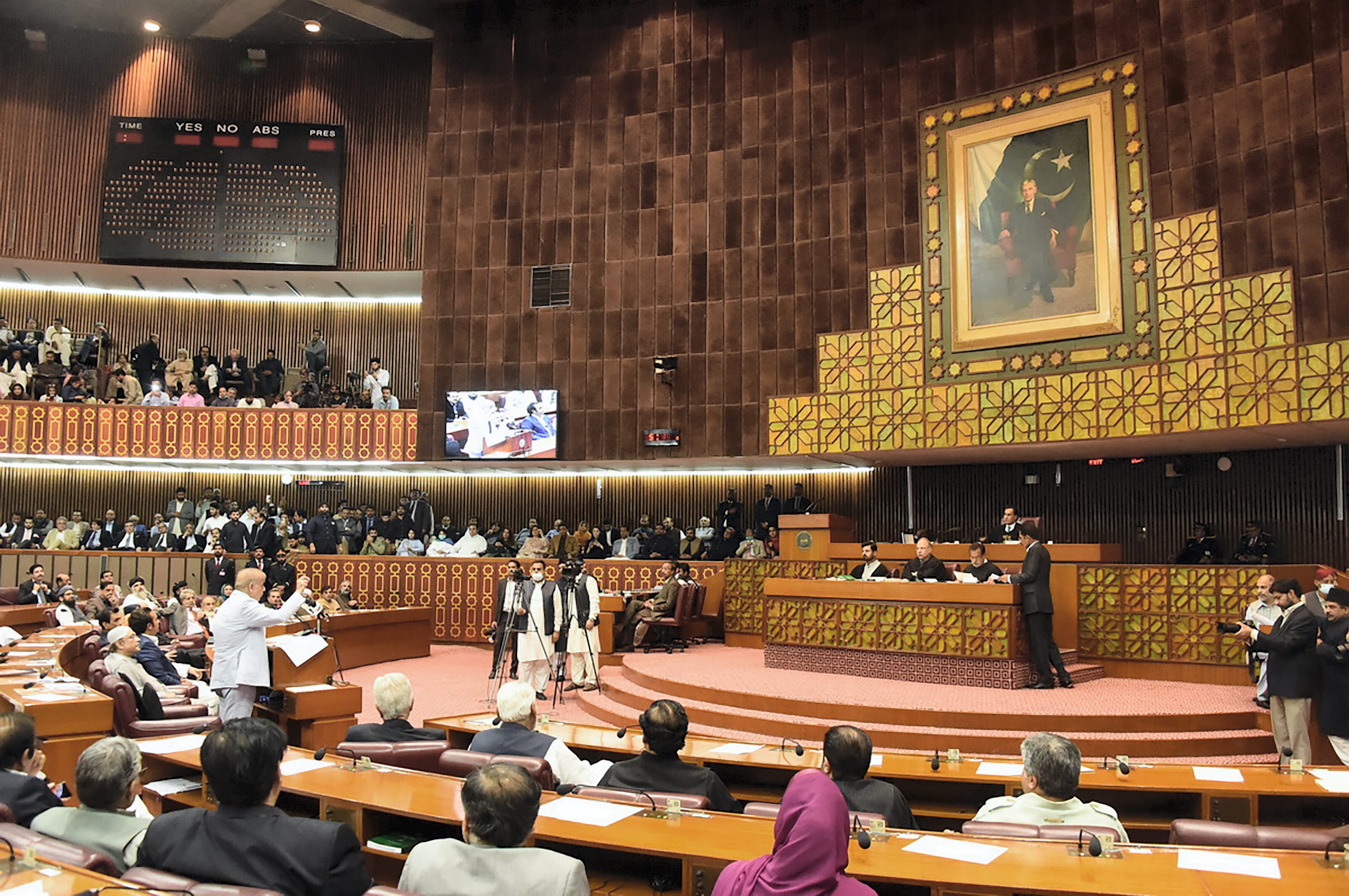 Pakistan’s National Assembly on Thursday passed a bill to abolish the former Imran Khan government’s election reforms giving expats the right to vote through I-Voting and the use of electronic voting machines (EVMs) in the country.

The Elections (Amendment) Bill 2022 presented by Parliamentary Affairs Minister Murtaza Javed Abbasi was passed with a majority vote in the lower house, with only members of the Grand Democratic Alliance (GDA) opposing it.

Abbasi, before presenting the bill, presented a motion to allow the bill be sent directly to the Senate for its approval, bypassing the relevant standing committee.

The bill is expected to be sent to the Senate on Friday.

Describing the bill of “immense significance”, Pakistan Muslim League-Nawaz (PML-N) minister Azam Nazeer Tarar recalled the ousted Pakistan Tehreek-e-Insaf (PTI) government had made multiple amendments to the Election Act, 2017, including those that allowed the use of EVMs and granted overseas Pakistanis the right to vote in general elections.

The PTI government had made the amendments through the Elections (Second Amendment) Bill, 2021, which it had bulldozed through the National Assembly along with 32 other legislations on November 17 last year, Tarar said.

The minister also said Thursday’s bill sought to revive the Elections Act, 2017 in the shape prior to those amendments, ensuring free, fair, and transparent elections.

Under the new bill, Tarar stated, two amendments were being made to Sections 94 and 103 of the act, both pertaining to the Election Commission of Pakistan (ECP) conducting pilot projects for overseas voting and the use of EVMs.

He said the Election Commission of Pakistan (ECP) had also expressed its inability to hold elections through I-Voting and EVMs in a short span of time and without proper homework.

The amendment under Section 94 of the Election Act, 2017, suggests the ECP may conduct pilot projects for voting by overseas Pakistanis in by-elections to ascertain the technical efficacy, secrecy, security, and financial feasibility of such voting and shall share the results with the government.

It said the report would be laid before both houses of Parliament within 15 days from the commencement of a session of a house.

According to the law minister, the Election Commission of Pakistan had also raised objections to the use of EVMs.

He, however, clarified the government was not against the use of the technology, and that holding polls using EVMs in a single day was “impossible”.

“We only have concerns about the misuse of technology as the Results Transmission System had failed in last general elections to favour a particular political party,” he said.

He also dispelled the impression that the amendments were aimed at depriving overseas Pakistanis of their right to vote.

“Overseas Pakistanis are a precious asset of the country and the government does not believe in snatching their right to vote,” he said.

Meanwhile, the PTI has strongly criticised the move and termed it a “regressive and condemnable act” of the government led by Pakistan Muslim League-Nawaz (PML-N) of Prime Minister Shehbaz Sherif.

PTI vice-chairman Shah Mahmood Qureshi tweeted: “PTI gave over nine million Overseas Pakistanis the right to vote. Today, this band of thieves and thugs removed this, disenfranchising a staggering number of Pakistanis and barring the use of electronic voting machines.”

GDA lawmaker Ghous Bakhsh Mehr, on the other hand, said that EVMs were being used across the world and Pakistan should at least try using them. “If not the whole country, then use them in some areas,” he said.

During the National Assembly session, details of the expenses for the next general elections were shared.

According to the electoral watchdog’s estimates, fresh polls will cost about Rs 47.41 billion, of which around Rs 15 billion will be for ensuring security.

The election commission had estimated the cost of conducting electronic voting at Rs 5.6 billion, while printing ballot papers would cost Rs 4.83 billion. Further, Rs 1.79 billion would be spent on training polling staff.

There are over nine million overseas Pakistanis in different counties and Khan enjoys vast support among them.

It is feared that giving them the right to vote may swing results in several constituencies.