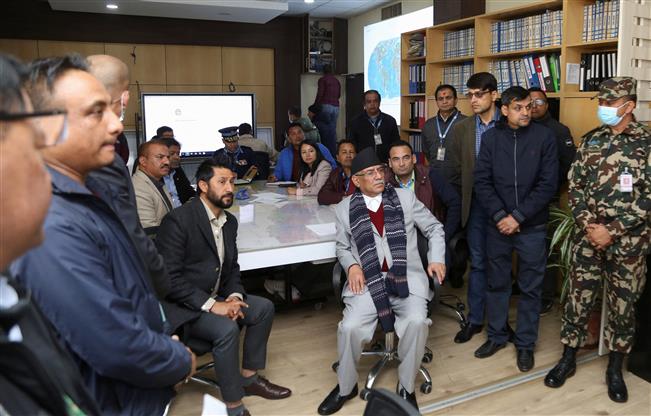 Nepal Prime Minister Pushpa Kamal Dahal Prachanda on Sunday instructed security personnel and all government agencies to carry out effective rescue operations after a Nepalese passenger plane with 72 people onboard crashed near the Pokhara airport.

The prime minister held an emergency meeting of the Cabinet as soon as a Yeti Airline ATR-72 aircraft crashed while landing near the Pokhara airport.

He instructed the Ministry of Home Affairs, security personnel, and all government agencies to carry out effective rescue operations in the tragic accident, My Republica newspaper reported.

The prime minister left for Tribhuvan International Airport to understand the details of the accident of the plane flying from Kathmandu to Pokhara with 4 crew members and 68 passengers, including 10 foreigners, onboard.

So far 32 bodies have been recovered from the accident site, the report said.

According to the Civil Aviation Authority of Nepal (CAAN), the aircraft took off from Kathmandu’s Tribhuvan International Airport at 10.33 am and crash-landed at the airport in Pokhara—a major tourist destination in the Himalayan nation.

The aircraft crashed on the bank of the Seti River between the old airport and the new airport.