Selection of Washington D.C. Archbishop Wilton Gregory wins praise from LGBTQ advocates in the US 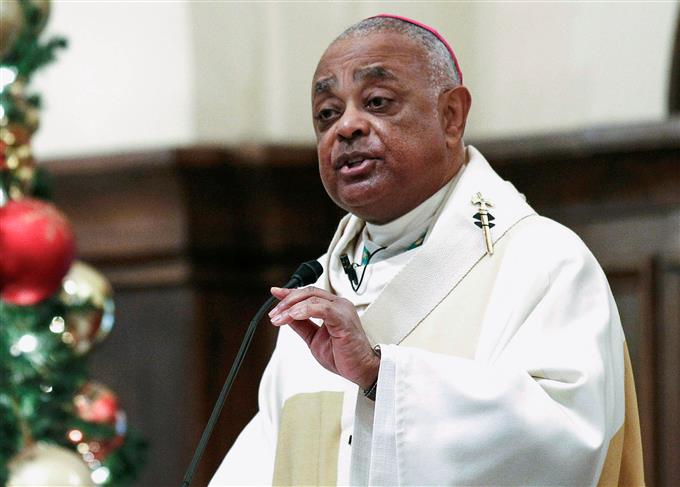 In a surprise announcement from his studio window to faithful standing below in St. Peter’s Square, Francis said the churchmen would be elevated to a cardinal’s rank in a ceremony on November 28.

Francis asked for prayers so the new cardinals “may help me in my ministry as bishop of Rome for the good of all God’s faithful holy people.”

The selection of Gregory won praise from LGBTQ advocates in the United States, days after Pope Francis grabbed headlines for voicing support for civil unions for gay couples.

Other new cardinals include an Italian who is the long-time papal preacher at the Vatican, the Rev. Raniero Cantalamessa, who is a Franciscan friar; the Kigali, Rwanda, Archbishop Antoine Kambanda; the Capiz, Philippines, Archbishop Jose Feurte Advincula, and the Santiago, Chile, Archbishop Celestino Aos Braco.

In 2010, while preaching at a Good Friday service attended by the then-pontiff Benedict XVI, Cantalamessa upset both Jewish and sex abuse survivors’ group when he likened allegations that the pope had covered up sex abuse cases against clerics to the “more shameful aspects of anti-Semitism.”

Another Franciscan who was tapped is Friar Mauro Gambetti, in charge of the Sacred Convent in Assisi.

The pope, when elected in 2013, chose St. Francis of Assisi as his namesake saint. Earlier this month, the pontiff journeyed to that hill town in Umbria to sign an encyclical, or important church teaching document, about brotherhood.

Gambetti was so surprised, at first he thought the pope was joking when he heard he was named, convent spokesperson the Rev Enzo Fortunato said.

Gambetti quickly pledged to “put himself at the service of humanity at a time so difficult to us all,” including offering compassion to the needy, Fortunato said in reference to the coronavirus pandemic.

In a reflection of the pope’s stress on helping those in need, Francis also named the former director of the Rome Catholic charity, Caritas, the Rev. Enrico Feroci, to be a cardinal.

The prestigious Washington archdiocese traditionally brings elevation to cardinal’s rank, so the appointment of Gregory, 73, last year by the pope had positioned him to be tapped for the honor.

Still, the timing of his rise to cardinal is noteworthy, coming in the thick of increased US attention on racial injustice following the police killing of George Floyd, a Black man, in Minnesota this year.

Gregory was publicly critical of US President Donald Trump’s visit to the St John Paul II National Shrine in Washington a day after civil rights demonstrators were forcibly cleared from a square to facilitate the president’s visit to an Episcopal church in the US capital.

Gregory has had his pulse on factions in the US Catholic Church, which has both strong conservative and liberal veins since he served three times as the head of the US Conference of Bishops.

Conservative prelates in the United States have openly lambasted Francis for his more liberal stands, including his support for same-sex civil unions that came out in a new documentary this week.

Gregory said in a statement that becoming a cardinal would allow him to work more closely with the pontiff in caring for the Catholic Church.

While Gregory headed the Atlanta diocese earlier in his career, he wrote positively in a column about his conversations with Catholic parents of LGBTQ children.

An advocate for LGBTQ Catholics, Francis DeBernardo, told The Associated Press that choosing Gregory for a cardinal’s post signals Francis wants “LGBTQ people to be part of the church, and he wants church people to respect them.”

He also praised the elevation to cardinal’s rank of a Vatican bishop who comes from Malta, a tiny, traditionally Catholic nation which has made significant progress in LGBTQ civil rights and protections in recent years.

DeBernardo was referring to Mario Grech, 63, who serves at the Vatican as secretary general of the Synod of Bishops office and who formerly headed the diocese on the Maltese island of Gozo.

“Since naming cardinals also affects who the next pontiff will be, the pope also shows that he is planning for the future of the church to continue in this affirming posture on issues of sexual orientation and gender identity,” the US-based DeBernardo said in a written statement.

Not all of the pope’s picks might stir positive recollections.

In 2010, while preaching at a Good Friday service attended by the then-pope, Benedict XVI, Cantalamessa upset both Jewish and sex abuse survivors’ groups when he likened allegations that the pontiff had covered up sex abuse cases against clerics to the “more shameful aspects of anti-Semitism.” The Vatican quickly distanced Benedict from Cantalamessa’s remarks.

Nine of the new cardinals are younger than 80, and thus eligible to elect the next pontiff in a secret conclave. Some cardinals head powerful Vatican offices, and pontiffs frequently turn to cardinals for advice.

No details were immediately given by the Vatican about the formal ceremony to make the churchmen cardinals, especially in view of travel restrictions involving many countries during the COVID-19 pandemic.

As he has in other groups of cardinals he tapped in his papacy, Francis in this selection reflected the global nature of the Catholic Church and his flock of 1.2 billion Catholics.

Others receiving the honor include Monsignor Marcello Semeraro, an Italian serving as prefect of the Vatican office which runs the saint-making process; Bishop Cornelius Sim, a Brunei native who serves as apostolic vicar of Brunei; the Italian archbishop of Siena and nearby towns in Tuscany, Augusto Lojudice; the retired bishop of San Cristobal de las Casas, Mexico, Monsignor Felipe Arizmendi Esquivel; and an Italian former Vatican diplomat, Archbishop Silvano Tomasi.

Churchmen over 80 who are named cardinals are chosen to honor their life of service to the church. Those in this batch too old to vote in a conclave are Cantalamessa, Tomasi, Feroci and Arizmendi Esquivel. — AP