As the Pakistan government continues to spread awareness about vaccination, around 300,000 recipients of the first dose never returned to receive the second dose of the vaccine 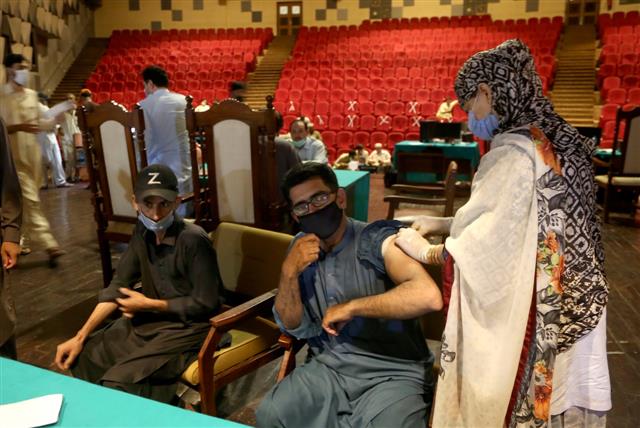 A government employee receives the Convidecia Covid-19 vaccine from a health worker while others wait their turn at a vaccination center in the Nishtar hall, in Peshawar, Pakistan on June 11, 2021. — AP/PTI

In an unconventional move to tackle vaccine hesitancy, the provincial government in Pakistan's Punjab has decided to block SIM cards of all those citizens who refuse to get themselves vaccinated against Covid-19.

According to the ARY News, this decision was taken at a meeting presided over by Provincial health minister Dr Yasmin Rashid in Lahore on Thursday.

The provincial government has been using all resources to contain the spread of coronavirus in the province, said Dr Rashid. She added that there has been a considerable decrease in Covid-19 cases in Punjab because of the implementation of SOPs and mass vaccination.

According to the ARY News, a report compiled by the Punjab Primary Health department has reported that the province has failed to achieve its set target for Covid-19 vaccination.

As the Pakistan government continues to spread awareness about vaccination, around 300,000 recipients of the first dose never returned to receive the second dose of the vaccine.

According to data, around 300,000 people have failed to return to receive the second dose after receiving their first dose since the start of the vaccination drive on February 2, reported Dawn.

An official of the Ministry of National Health Services (NHS) said the second dose of the majority of the Covid-19 vaccines is administered after an interval of three weeks. However, in the case of the AstraZeneca vaccine, the second dose is given after a period of 12 weeks.

"Around 300,000 first dose recipients never showed up on their due dates," he said.

"We are categorising such people; there is a possibility that some of them might have died before getting their second dose. Another group which has been identified consists of those who contracted Covid-19 after receiving their first dose and then decided not to get the second one. Others might have fallen to the negative propaganda and skipped the vaccination," he added. — ANI