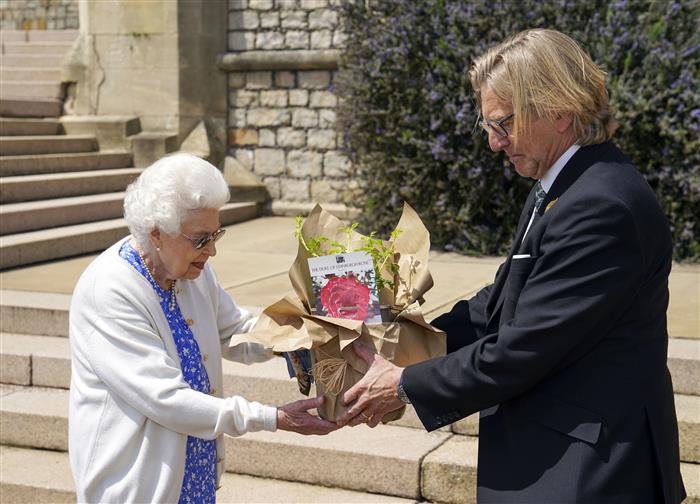 Britains Queen Elizabeth II receives a Duke of Edinburgh rose, given to her by Keith Weed, President of the Royal Horticultural Society. AP/PTI photo.

Queen Elizabeth II marked what would have been her late husband's 100th birthday on Thursday with the planting of a newly-bred rose named after the Duke of Edinburgh.

The 95-year-old monarch received the gift from the Royal Horticultural Society (RHS) and watched as it was planted in the gardens at Windsor Castle to remember Prince Philip, the Duke of Edinburgh, who passed away in April.

The Queen, seen in photographs wearing a blue dress, white cardigan and sunglasses, described the new Duke of Edinburgh Rose, which is deep pink and double-flowered, as "lovely" and the tribute as "very kind".

"It's a rose named the Duke of Edinburgh Rose to mark his centenary and it's a commemorative rose for all the marvellous things that he did over his lifetime and for everyone to remember so much that he did,” Keith Weed, the President of RHS, told the monarch as he presented the rose plant to her.

"Each rose, there's a donation that goes to the Living Legacy Fund which will help more children. It's a beautiful flower in itself, a double flower," he said.

The rose plant, bred by Harkness Roses which has been breeding and growing British roses since 1879, should grow to around 70cm tall.

Prince Philip died peacefully at his apartment in Windsor Castle on April 9 and was laid to rest in a ceremonial funeral at St George's Chapel within the castle grounds on April 17. PTI