Racism is abhorrence we must all reject: UN Chief Antonio Guterres amid increased violence in NYC : The Tribune India

Racism is abhorrence we must all reject: UN Chief Antonio Guterres amid increased violence in NYC 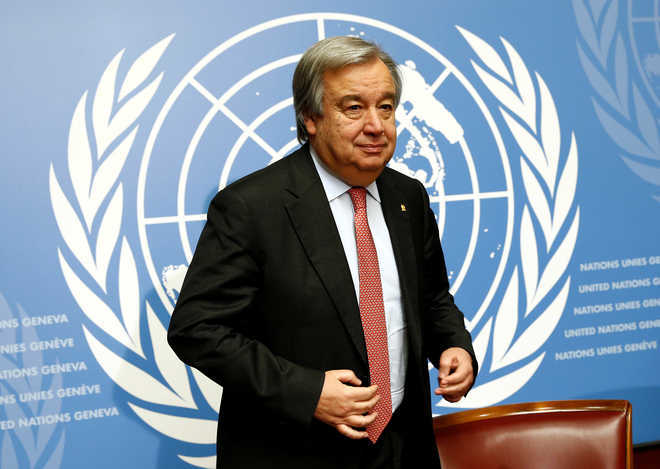 UN Secretary General Antonio Guterres has asserted that racism must be rejected by all and called on leaders across the societies to invest in social cohesion to ensure that every group feels valued, as he expressed sadness over the violent protests across the US after the death of an African-American man in Minneapolis.

“I am heartbroken to see violence on the streets in our host country and our host city of New York,” Guterres said in a tweet on Tuesday.

Protests across New York and the US intensified as thousands of demonstrators took to the streets demanding an end to police brutality after 46-year old George Floyd was killed last week when a white police officer kneeled on his neck for nearly nine minutes while he lay handcuffed and pinned to the ground.

Authorities had to impose curfew in New York City as incidents of looting increased across the city with groups of people vandalising and breaking into retail stores in Manhattan and stealing merchandise worth thousands of dollars.

Guterres said grievances by protesters must be heard but should be expressed peacefully and authorities must show restraint in responding to demonstrations.

The UN chief underscored that diversity is a richness - never a threat in every society.

“Racism is an abhorrence that we must all reject. Leaders in all sectors of society must invest in social cohesion so every group feels valued,” he said adding that there is need to address inequality and discrimination, strengthening support for the most vulnerable and providing opportunities for everyone.

UN Spokesperson Stephane Dujarric said in the daily press briefing that the success of diverse societies needs to include investments in social cohesion, which also includes the need to address possible areas of discrimination and of racism.

“…National Government must be mobilised. Local authorities must be mobilised, civil society, faith based organisations, the private sector, basically society as a whole.” On a question about security in the UN Headquarters amid a tense atmosphere of violence and looting around the city, Dujarric said the UN security chief is in close touch with the US Mission to the UN and with the New York Police Department to ensure the safety of the UN compound.

“But we're not aware of any specific targeting of the UN. We are remaining in close and constant touch with the federal and the local authorities on the security front." PTI