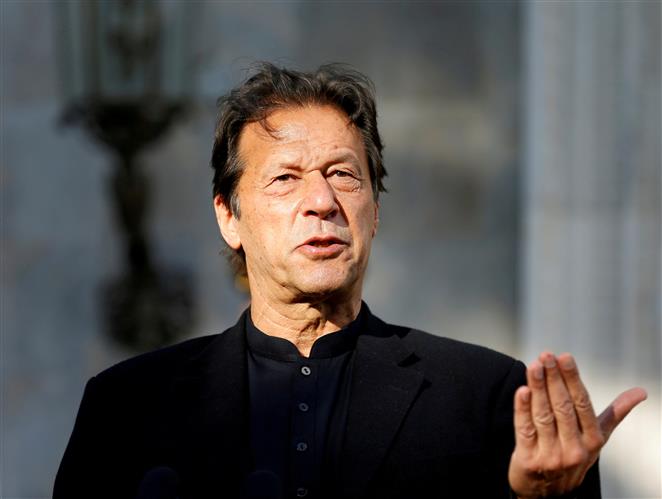 Pakistani rights groups are criticising Prime Minister Imran Khan after he claimed in an online show that wearing the veil - the traditional Islamic head covering - will protect women from sexual assault and not lead men into temptation.

The Pakistani leader made the comments on Sunday in a live tele-chat dubbed “Prime Minister On Call With You” streamed by state-owned Pakistan Television in which he answers questions from the public.

A cricket star who had a reputation of a womaniser before he turned to politics and became devoutly religious, Khan said women who wear the veil would not tempt men into attacks - remarks that women’s rights activists say excuse rapists and put the blame on women. He also said vulgarity and obscenity combine to destroy societies and families.

“If you keep increasing vulgarity in a society, then definitely there will be this impact,” he said “What is the whole concept of observing the veil? It is so that there is no temptation in society. Each individual does not have the willpower or strength, if you keep increasing obscenity in the society and if you don’t care, then there are impacts of such things.”

The remarks caused an uproar among Pakistani rights groups, which say such misogynistic remarks shame women and excuse rapists.

“Not only does this display a baffling ignorance of where, why and how rape occurs, but it also lays the blame on rape survivors,” said the Human Rights Commission in a statement. The Commission chairperson Hina Jilani is a member of The Elders, a group formed in 2007 by Nelson Mandela.

The commission demanded an apology from Khan and a commitment his administration would tackle rape “as an act of violence, of power”. In the call show, Khan also attacked Hollywood and the Indian cinema centre known as Bollywood as purveyors of obscenity and vulgarity that he said contribute to rape, high divorce rates and the break-up of family units in society.

“If our religion gives us the concept of observing veil, then there is some philosophy behind it and the philosophy is to save the family system and to protect the society from such things,” Khan said.

Khan’s information advisor Raoof Hasan said the prime minister’s remarks were misinterpreted and claimed he advocated a “holistic” approach to sexual assault that includes both strong legal repercussions for rapists and sexual predators and efforts by society as a whole working to find remedies.

“Plucking a single line out distorts the prospective and does not serve the cause of the actual statement,” Hasan said.

A government statement quoted Khan as having said on the subject of sexual assault: “The whole society needs to fight it collectively. There are some wars which are won by societies.”

Pakistan has been rocked by high-profile sexual attacks, including an assault in September of a mother gang-raped before her children after their car broke down on a major freeway at night. The following day a senior police official questioned why the woman was alone, had not checked her gas gage before traveling or chosen a busier road. Activist calls for his censure were ignored.

In the first six months of last year, nearly 1,500 children were sexually assaulted in Pakistan, according to Sahil, a charity that monitors and fights sexual abuse of children. The figures represent only those that are reported in the more than 80 national, provincial and regional publications that the organization monitors.

Critics say Khan’s statements are reflective of Pakistan’s patriarchy and culture of impunity.

“It is regrettable that the prime minister does not appear to understand just how vulnerable and unsafe women are in this society,” political analyst and author Zahid Hussain wrote in a commentary Wednesday. “It is a failure of our law enforcement, as well as the prevailing culture of impunity that makes women insecure.” AP