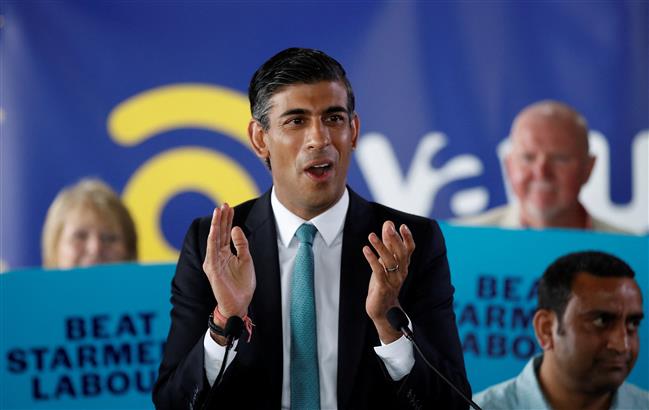 Rishi Sunak has unleashed an intense campaign spree this weekend in his mission to win Conservative Party votes to be elected their leader and on Saturday pledged to put the UK on a “crisis footing” if elected Prime Minister.

The 42-year-old former Chancellor told ‘The Times’ in an interview that a business-as-usual approach would not work in the face of the serious economic challenges facing the country.

“Having been inside government I think the system just isn’t working as well as it should. And the challenges that I’m talking about, they’re not abstract, they’re not things that are coming long down the track,” he told the newspaper.

“They’re challenges that are staring us in the face and a business-as-usual mentality isn’t going to cut it in dealing with them. So, from day one of being in office I’m going to put us on a crisis footing,” he said.

Ahead of a speech in Grantham, the eastern England hometown of 1980s’ Prime Minister Margaret Thatcher—the former Tory leader both Sunak and opponent Liz Truss are pitching as their role model to woo traditional voters—the Southampton-born Indian-origin former banker-turned-politician highlighted how his deeply Conservative values shaped by his family’s pharmacy business.

“I was brought up in a home with kitchen-table conservative values, my mum ran a small business, Margaret Thatcher talked about family budget. All of us care about what we leave our children and our grandchildren. Sound money is the most conservative of conservative values. If we don’t stand for that, I don’t know what the point of the Conservative Party is,” he said.

Besides tackling inflation as a national emergency, Sunak said his focus will also be on delivering better value for money for the taxpayer-funded National Health Service (NHS) – an issue that is personal to him with a grandparent just out of an NHS hospital.

“This is personal for all of us, the backlog issue. He literally has just come out and he’s very sick,” shared Sunak.

“We’ve been extremely worried as a family about everything over the last few weeks, he’s my last remaining grandparent. It will be unacceptable if millions and millions of people are waiting too long for the treatments they deserve,” he said.

The MP for Richmond in Yorkshire admitted missing his family while on the campaign trail and using video calls to stay in touch.

“Family is core to who I am. I miss them a lot right, they are in Yorkshire and I am here. We’re on video every day. But it’s not the same but they’re used to that,” said Sunak, who is married to Akshata Murty, the daughter of Infosys co-founder Narayana Murthy.

“As prime minister, you can expect that I will be someone who is incredibly supportive of families. Families are amazing, families do something that no government can ever hope to replicate. I wouldn’t be here without the love and support, the sacrifice, kindness of my family in all its different ways. That’s why I think families are really special. As prime minister I would absolutely champion families,” he said.

As someone who swore his oath of allegiance on being elected as a member of Parliament in the House of Commons on the ‘Bhagavad Gita’, the former Cabinet minister said his Hindu faith gives him strength and recalls one of his “proudest moments” when as Britain’s first Indian-origin Chancellor he lit Diwali diyaas outside No. 11 Downing Street.

Sunak is going head-to-head with Foreign Secretary Truss in the race to win over the Tory members eligible to vote for their new party leader via postal ballots, to be mailed out early next month.

Unlike his frontrunner winning streak with his party MPs selecting the two finalists in internal ballots this month, Sunak is now an underdog in the race to replace Boris Johnson as surveys indicate a comfortable lead for his opponent. Truss’ promise of cutting taxes from day one is seen as only one of the factors behind this popularity.

There is also a significant number within the estimated 180,000 Tory voters who remain fiercely loyal to Johnson and view Sunak as the minister responsible for his hastened departure after the former Cabinet minister’s resignation set off the current events in motion for the governing party.