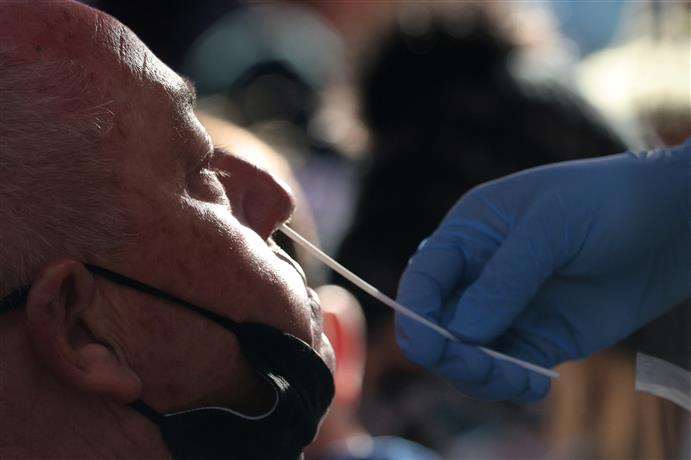 A person takes a Covid-19 test in Times Square as the Omicron coronavirus variant continues to spread in Manhattan, New York City. Reuters

US airlines cancelled about 800 more flights on Monday after nixing thousands of flights during the Christmas holiday weekend, as Omicron cases across the country rise, forcing crews to isolate and travellers to seek other forms of travel.

Shares of American Airlines Group Inc, United Airlines Holdings Inc, Delta Air Line Inc and Southwest Airlines Co were down between 2% and 3% in trading before the opening bell.

Nearly 740 flights were cancelled within, into, or out of the United States by early Monday morning, a tally on flight-tracking website FlightAware.com showed.

The flight cancellations on Monday were on top of over 3,000 cancellations during the Christmas holiday weekend, typically a peak time for travel for Americans.

With rising infections, airlines have been forced to cancel flights, with pilots and cabin crew needing to quarantine, while poor weather in some areas added to travellers woes.

Delta, United, Southwest and American did not immediately respond to Reuters’ requests for comment.

Over the weekend, at least three cruise ships were forced to return to port after Covid-19 cases were detected on board, according to media reports.

Travel firms Booking Holdings Inc, Airbnb Inc, Expedia Group Inc and Tripadvisor Inc were all down between 0.6% and 1.8%. —Reuters