Xi, Putin firm up strategic alliance against US and allies; opposes NATO expansion, ‘camps’ in Asia-Pacific : The Tribune India

Xi, Putin firm up strategic alliance against US and allies; opposes NATO expansion, ‘camps’ in Asia-Pacific

Moscow backs Beijing in denouncing the formation of blocs in Asia-Pacific region, in a veiled reference to Quad alliance 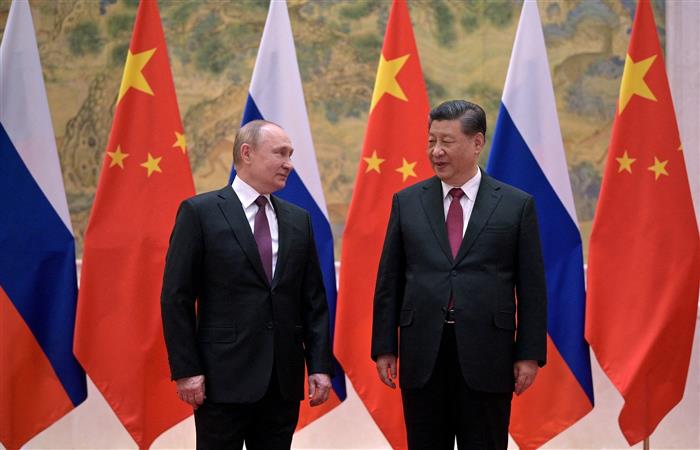 China joined Russia on Friday to oppose the expansion of NATO amid heightening tensions with Ukraine, while Moscow backed Beijing in denouncing the formation of blocs in the Asia-Pacific region, in a veiled reference to the Quad alliance as they deepened their strategic alliance to push back mounting pressure from the US and allies.

Chinese President Xi Jinping and his Russian counterpart Vladimir Putin during their summit on the sidelines of the Beijing Winter Olympics opening ceremony boycotted by diplomats from the US and allies over allegations of violation of human rights against Uygur Muslims in Xinjiang scaled up the emerging alliance between the two countries to a new level.

Putin was the star leader at the opening ceremony of the Winter Olympics, which was attended by 32 heads of governments and international organisations, including Pakistan Prime Minister Imran Khan.

India announced a diplomatic boycott of the Games after China fielded Qi Fabao, the regimental commander of the People’s Liberation Army, who was injured during the 2020 military face-off with Indian soldiers in the Galwan Valley in eastern Ladakh, as a torchbearer for the event’s Torch Relay.

After their summit, Xi and Putin issued a lengthy joint statement in which they expressed their firm opposition to the “unilateral approach” by the US to resolve the global disputes.

“Some forces representing a minority on the world stage continue to advocate unilateral approaches to resolving international problems and resort to military policy,” it read.

China firmly backed Russia’s opposition to the expansion of the North Atlantic Treaty Organisation (NATO) by including Ukraine which was stated to be the reason for Moscow to deploy over a lakh of troops along the Ukraine border, setting off military tensions with the US and European Union countries.

The joint statement said “the sides oppose further enlargement of NATO and call on the North Atlantic alliance to abandon its ideologised Cold War approaches, to respect the sovereignty, security and interests of other countries.” Similarly, Russia backed China in opposing the “formation of closed bloc structures and opposing camps in the Asia-Pacific region”, without directly referring to the Quad alliance involving the US, India, Japan and Australia.

“The sides stand against the formation of closed bloc structures and opposing camps in the Asia-Pacific region and remain highly vigilant about the negative impact of the United States’ Indo-Pacific strategy on peace and stability in the region”, the joint statement said.

The US, India and several other world powers have been talking about the need to ensure a free, open and thriving Indo-Pacific in the backdrop of China’s aggressive military manoeuvring in the resource-rich region which is also crucial for global trade and shipping.

The US maintains it will support its regional allies in the defence of a free and open Indo-Pacific region. America has been periodically sending its naval and air patrols through the South China Sea, challenging China’s claims of sovereignty over the area and also asserting the freedom of navigation.

The two sides are “seriously concerned about the trilateral security partnership between Australia, the United States, and the United Kingdom (AUKUS), which provides for deeper cooperation between its members in areas involving strategic stability, in particular their decision to initiate cooperation in the field of nuclear-powered submarines,” it added.

Russia and China believe that such actions are contrary to the objectives of security and sustainable development of the Asia-Pacific region, increase the danger of an arms race in the region, and pose serious risks of nuclear proliferation, it said.

“Noting the extraordinary journey made by the Shanghai Cooperation Organisation over the past two decades and its role as an important constructive force in the international community, President Xi stressed the need for the two sides to view the development of the Organisation with a strategic and long-term perspective, and keep it in the right direction, so as to better protect the security and common interests of member states”.

“He also expressed China’s readiness to increase communication and coordination with Russia to enable the BRICS cooperation mechanism to play a bigger role in upholding multilateralism, strengthening cooperation against COVID-19 and boosting economic recovery, so that the five BRICS countries, while pursuing their own national development, could make a greater contribution to global development”, the joint statement said.

China takes over as chair of the BRICS grouping this year.

“The sides intend to develop cooperation within the “Russia-India-China format”, the joint statement said.

“Russia sees in China the most important strategic partner and a like-minded friend, and hails the Russia-China relationship as an example for international relations in the 21st century,” it said.

In his talks with Putin, Xi said China and Russia are committed to “deepening back-to-back strategic cooperation”.

“This is a strategic decision that has far-reaching influence on China, Russia and the world,” Xi said, state-run Xinhua News Agency reported.

Putin praised the “unprecedented” close relations with China, in his opening remarks to Xi.

Relations “are developing in a progressive way with a spirit of friendship and strategic partnership,” Putin said. “They have indeed become unprecedented.”

Russia also expressed its support to China’s claims over Taiwan under the One China policy. China views the self-ruled island as a rebel province that should be reunited with the mainland, even by force.