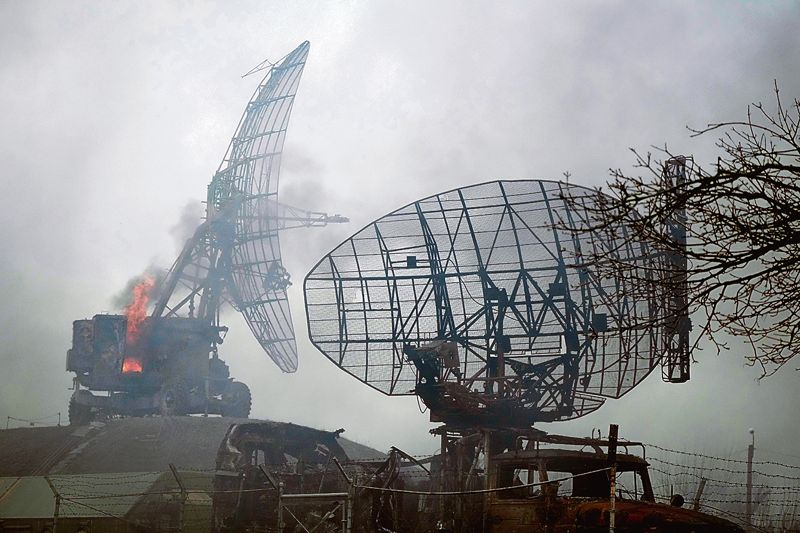 The damaged radar arrays and other equipment at Ukrainian military facility outside Mariupol, Ukraine. AP/PTI

Russia stunned the world by launching an invasion of Ukraine by land, sea and air on Thursday morning, setting in motion reprisals from the US-led bloc and putting under threat the macroeconomic stability of energy importers like India after crude shot through $100 per barrel and is poised to rise further.

In a televised address as the attack began, Russian President Vladimir Putin warned other countries that any attempt to interfere would “lead to consequences you have never seen in history”.

Putin rang up Prime Minister Narendra Modi late on Thursday and briefed him about the recent developments regarding Ukraine. 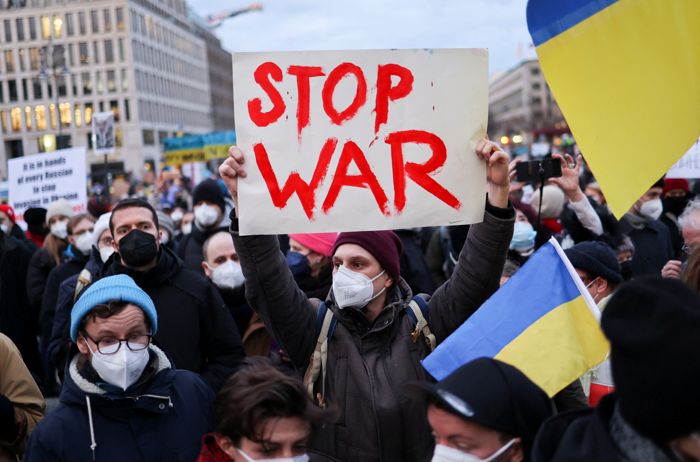 PM Modi reiterated his long-standing conviction that the differences between Russia and the NATO group could only be resolved through honest and sincere dialogue and appealed for an immediate cessation of violence. The PM called for concerted efforts from all sides to return to the path of diplomatic negotiations and dialogue.

PM Modi also sensitised the Russian President about India’s concerns regarding the safety of its citizens, especially students, in Ukraine and conveyed that New Delhi attached highest priority to their safe exit and return to India, said an official statement. The leaders agreed that their officials and diplomatic teams would continue to maintain regular contacts on issues of topical interest. The conversation came after the PM chaired a meeting of the Cabinet Committee on Security and took stock of the situation in Ukraine.

External Affairs Minister S Jaishankar had spoken to the two of Poland’s neighbours to facilitate the evacuation of Indian citizens through land border crossings, said Foreign Secretary Harsh Vardhan Shringla at a special briefing. He said the Indian mission in Kyiv was offering all possible assistance to stranded Indians.

US President Joe Biden said “devastating economic sanctions” would be imposed on Russia. Asked if India, one of the US’ major defence partners, was in sync with Washington’s plans, Biden said consultations with New Delhi would be held shortly. “The attack by Russia cannot go unanswered. If it did, consequences will be much worse,” he warned in an address after the G-7 virtual summit in which all members decided to punish Russia. The US also decided to release additional barrels of oil and requested its allies to follow suit in order to dampen the rising cost of crude that is affecting the economies of major oil importers such as India, Japan and South Korea. At the UN Security Council meeting earlier in the day, India urged immediate de-escalation and called on all sides to give diplomacy a chance. But the mood in the UNSC was sombre with the US promising to bring in a draft resolution to put Russia in a corner. “We have seen a draft resolution. We will wait to see the shape it takes before we pronounce our stand on the issue,” said Shringla.

China was the only major country standing with Russia even as the G-7 (Group of Seven) has scheduled a virtual summit to finalise sanctions against Russia. Beijing declined to term the Russian military advance as an “invasion” and, like India, also urged all sides to exercise restraint, even as it advised its citizens there to stay home or display a Chinese flag if they needed to drive anywhere.

In Moscow, the Kremlin spokesperson said the two goals of Russia’s special operation were to protect the Donetsk and Lugansk People’s Republics to ensure demilitarisation and denazification of Ukraine. The operation’s timeframe would be defined by Putin, said a Kremlin spokesperson.

Indian pupils turn up outside embassy

A large number of Indian students turned up outside the Indian embassy in Kyiv seeking help. About 20,000 Indians are stranded in Ukraine.

AI plane on way to Kyiv called back

An Air India plane that took off for Kyiv on Thursday to bring back Indians was called back to Delhi due to closure of Ukrainian airspace.

London: British PM Boris Johnson vowed to ‘hobble’ Russian economy with sanctions for what he termed as President Putin’s ‘hideous and barbaric’ venture.