A convoy of 160 civilian cars leaves the encircled port city of Mariupol along a designated humanitarian route, the city council reports 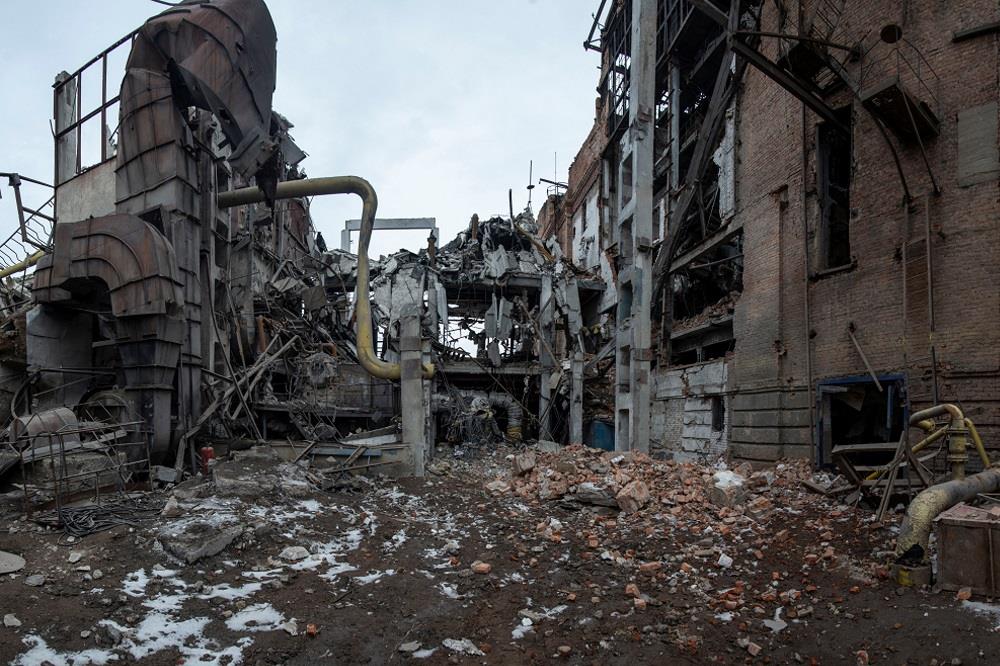 A thermal power plant destroyed by shelling in Sunny region of Ukraine. Reuters

Russia and Ukraine kept a fragile diplomatic path open with a new round of talks even as Moscow’s forces pounded away at Kyiv and other cities across the country in a punishing bombardment the Red Cross said has created “nothing short of a nightmare” for civilians.

Meanwhile, a convoy of 160 civilian cars left the encircled port city of Mariupol along a designated humanitarian route, the city council reported on Monday.

The latest negotiations, held via video-conference on Monday, were the fourth round involving higher-level officials from the two countries and the first in a week. The talks ended without a breakthrough after several hours, with an aide to Ukrainian President Volodymyr Zelenskyy saying the negotiators took “a technical pause” and planned to meet again on Tuesday.

In Washington, White House press secretary Jen Psaki said at a briefing on Monday that while the Biden administration supported Ukraine's participation in the talks with Russia, Russian President Vladimir Putin would have to show signs of de-escalating in order to demonstrate good faith.

According to a senior US defence official, Russian troops were still about 15 kilometres from the centre of Kyiv.

The official said Russian forces had launched more than 900 missiles but that Ukraine's airspace is still contested.

Overnight, air raid alerts sounded in cities and towns around the country, from near the Russian border in the east to the Carpathian Mountains in the west, and fighting continued on the outskirts of Kyiv. Ukrainian officials said Russian forces shelled several suburbs of the capital.

Ukrainian authorities said two people were killed when the Russians struck an aeroplane factory in Kyiv, sparking a large fire. The Antonov factory is Ukraine's largest aircraft plant and produces many of the world's biggest cargo planes.

And a Russian airstrike near a Ukrainian checkpoint caused extensive damage to a downtown Kyiv neighbourhood, killing one person, Ukraine's emergency agency said.

In an area outside Kyiv, Fox News reporter Benjamin Hall was injured while reporting and was hospitalised, the network said.

In Russia, the live main evening news programme on state television was briefly interrupted by a woman who walked into the studio holding a poster against the war. The OVD-Info website that monitors political arrests said she was a Channel 1 employee who was taken into police custody.

A town councillor for Brovary, east of Kyiv, was killed in fighting there, officials said. Shells also fell on the Kyiv suburbs of Irpin, Bucha and Hostomel, local authorities said.

Airstrikes were reported across the country, including the southern city of Mykolaiv, and the northern city of Chernihiv. Explosions also reverberated overnight around the Russian-occupied Black Sea port of Kherson.

Nine people were killed in a rocket attack on a TV tower in the western village of Antopol, according to the region's governor.

In the eastern city of Kharkiv, firefighters doused the smoldering remains of a four-storey residential building. It was unclear whether there were casualties.

In the southern city of Mariupol, the city council didn't say how many people were in the convoy headed westward for the city of Zaporizhzhia. But it said a cease-fire along the route appeared to be holding.