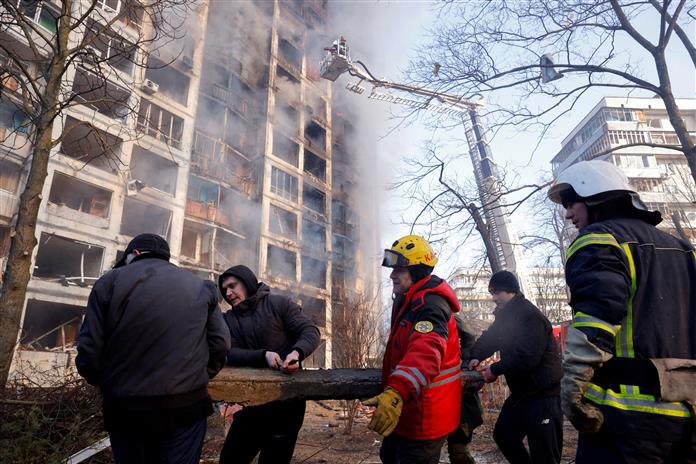 Firefighters remove debris after a residential building was hit by shelling in Kyiv, Ukraine, on Tuesday. REUTERS

Russia stepped up its bombardment of Kyiv on Tuesday, devastating an apartment house and other buildings, while civilians in 2,000 cars fled Mariupol along a humanitarian corridor in what was believed to the biggest evacuation yet from the besieged seaport.

On the diplomatic front, another round of talks began between Russia and Ukraine via video, and the leaders of three European Union countries — including Poland, a NATO member on Ukraine’s doorstep — planned a visit to the embattled capital in a bold show of support.

As the number of people driven from the country by war crossed 3 million, explosions thundered across Kyiv before dawn from what Ukrainian authorities said were artillery strikes. President Volodymyr Zelenskyy said barrages hit four buildings in Kyiv and killed dozens of people. The shelling ignited a huge fire in a 15-storey apartment building. In Ukraine’s east, Russian forces launched more than 60 strikes overnight on the second-largest city, Kharkiv, according to the regional administration chief Oleh Sinehubov.

Those sanctioned include a number of Russian oligarchs, including Alfa Group co-founders Mikhail Fridman and German Khan, and some of the top governmental spokespersons who have been instrumental in spreading President Vladimir Putin's propaganda. — AP

Prime Ministers of Poland, Czech Republic and Slovenia reached Kyiv by train despite the security risks, in a visit that EU officials said was not sanctioned by other members of the 27-nation bloc.

Pierre Zakrzewski, videographer for US-based Fox News, was killed when the vehicle he was travelling in came under fire near Kyiv. He had covered conflicts in Iraq, Afghanistan and Syria for Fox News.