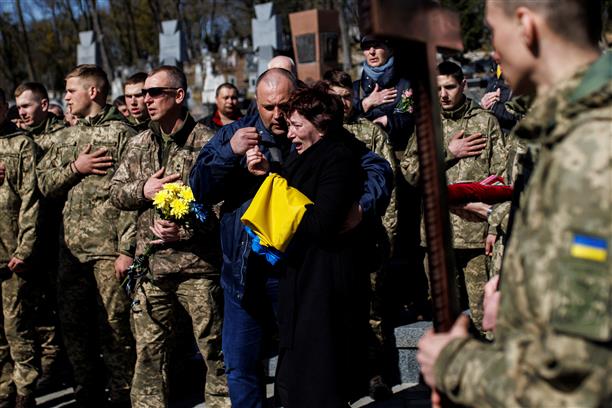 The mother of a solider killed in the Russia-Ukraine conflict mourns his death in Lviv. Reuters

The Kremlin said peace talks between Russia and Ukraine may get under way in Turkey on Tuesday and it was important they take place face-to-face.

Russian President Vladimir Putin and his Turkish counterpart Tayyip Erdogan agreed in a telephone call on Sunday for Istanbul to host the talks, which Ankara hopes will lead to a ceasefire in Ukraine.

“While we cannot and will not speak about progress at the talks, the fact that they are taking place in person is important," Kremlin spokesperson Dmitry Peskov told reporters in a conference call. “We are adhering to a policy of not disclosing any information about the talks, which we think could only hurt the negotiation process,” he said.

Peskov said no major progress had been made in the talks themselves, or on the idea of a potential meeting between Putin and Ukrainian President Volodymyr Zelenskyy. "Unfortunately we cannot see any substantial achievements or breakthroughs (in the talks) so far," he said. In separate comments, Russian Foreign Minister Sergei Lavrov said a meeting between the two leaders would be counterproductive if it were held now. He said they should meet once the sides achieve progress. “A meeting between Putin and Zelenskyy is needed as soon as we get closer to resolving all key issues," Lavrov said. —Reuters

New Delhi: Russian Foreign Minister Sergey Lavrov is expected to come to India this week, making it the first visit to the country by a senior Russian official since the Russia-Ukraine conflict broke out. The minister is expected to iron out a method for payment for crude oil being sourced from Russia and meeting the needs of New Delhi’s military hardware. TNS