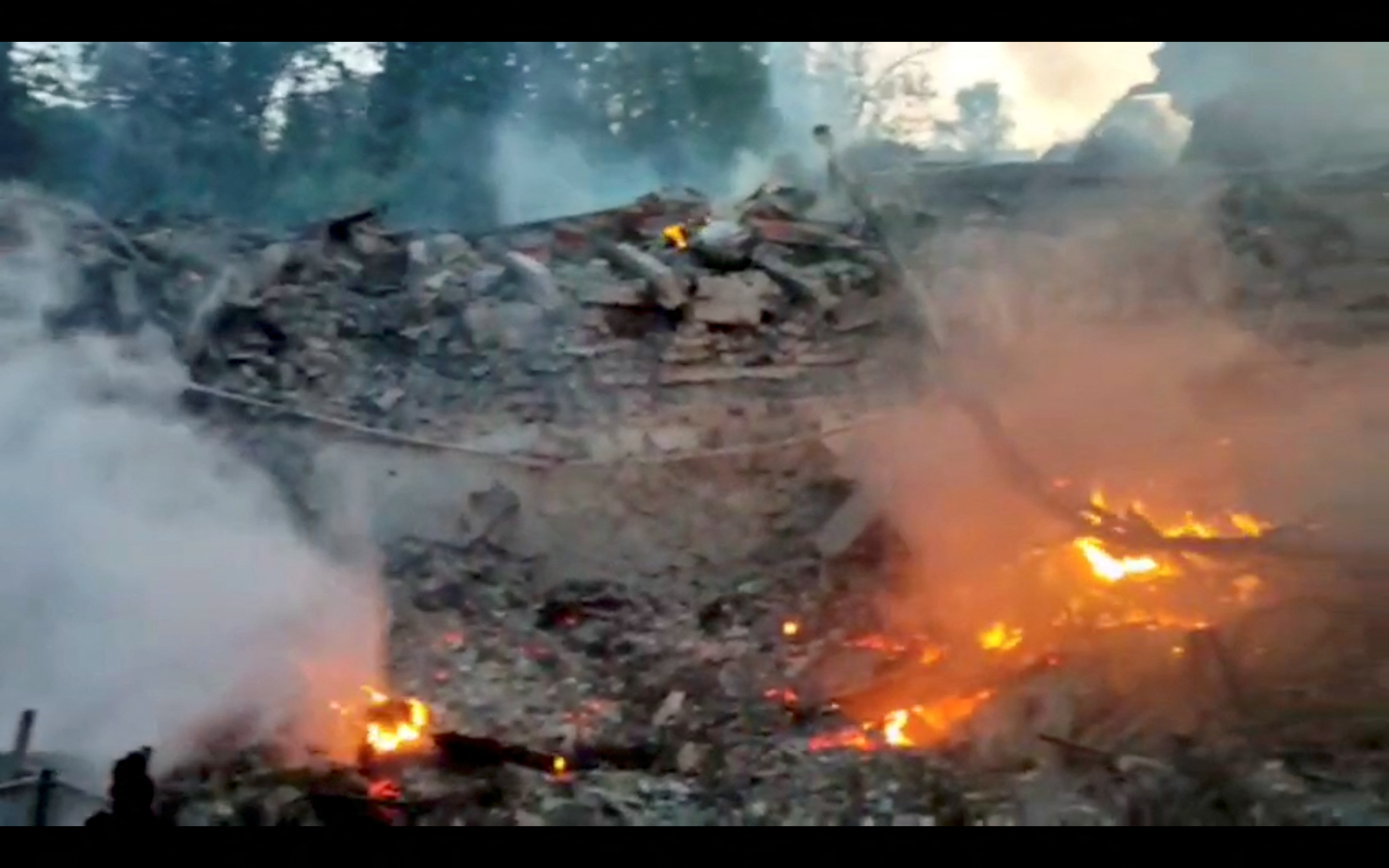 Burning debris is seen, after a school building was hit in a shelling, in the village of Bilohorivka, Luhansk, Ukraine, on May 8, 2022. Luhansk Regional Military-Civil Administration/Handout via Reuters

As many as 60 people were feared to have been killed in the Russian bombing of a village school in the eastern Ukrainian region of Luhansk, the regional governor said on Sunday.

Governor Serhiy Gaidai said Russian forces dropped a bomb on Saturday afternoon on the school in Bilohorivka where about 90 people were sheltering, causing a fire that engulfed the building.

“The fire was extinguished after nearly four hours, then the rubble was cleared, and, unfortunately, the bodies of two people were found,” Gaidai wrote on the Telegram messaging app.

Reuters could not immediately verify the report.

Ukraine and its Western allies have accused Russian forces of targeting civilians in the war, which Moscow denies.

In the ruined southeastern port city of Mariupol, scores of civilians have been evacuated from a sprawling steel plant in a week-long operation brokered by the United Nations and the International Committee of the Red Cross (ICRC).

Ukrainian President Volodymyr Zelenskiy said in an address late on Saturday that more than 300 civilians had been rescued from the Azovstal steelworks and authorities would now focus on trying to evacuate the wounded and medics. Other Ukrainian sources have cited different figures.

Russian-backed separatists on Saturday reported a total of 176 civilians evacuated from the plant.

The Azovstal plant is a last hold-out for Ukrainian forces in the city now largely controlled by Russia, and many civilians had also taken refuges in its underground shelters. It has become a symbol of resistance to the Russian effort to capture swathes of eastern and southern Ukraine.

Russian President Vladimir Putin calls the invasion he launched on Feb. 24 a “special military operation” to disarm Ukraine and rid it of anti-Russian nationalism fomented by the West. Ukraine and its allies say Russia launched an unprovoked war.

Mariupol is key to blocking Ukrainian exports and linking the Crimean Peninsula, seized by Russia in 2014, and parts of the eastern regions of Luhansk and Donetsk that have been controlled by Russia-backed separatists since that same year.

In an emotional address on Sunday for Victory Day, when Europe commemorates the formal surrender of Germany to the Allies in World War Two, Zelenskiy said that evil had returned to Ukraine with the Russian invasion, but his country would prevail.

U.S. President Joe Biden and other G7 leaders were to hold a video call with Zelenskiy on Sunday in a show of unity ahead of Victory Day celebrations on Monday in Russia.

Victory Day is a major event in Russia and Putin will preside on Monday over a parade in Moscow’s Red Square of troops, tanks, rockets and intercontinental ballistic missiles, showing military might even as his forces fight on in Ukraine.

His speech could offer clues on the future of the war.

Russia’s efforts have been stymied by logistical and equipment problems and high casualties in the face of fierce resistance.

U.S. Central Intelligence Agency Director William Burns said on Saturday that Putin was convinced “doubling down” on the conflict would improve the outcome for Russia.

“He’s in a frame of mind in which he doesn’t believe he can afford to lose,” Burns told a Financial Times event in Washington on Saturday.