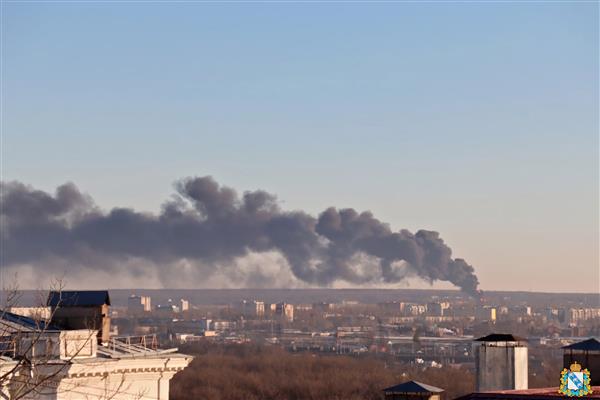 Smoke rises after a drone attack near an airport in Kursk region, Russia, that borders Ukraine. AP/PTI

A third Russian airfield was ablaze on Tuesday from a drone strike, a day after Ukraine demonstrated an apparent new ability to penetrate hundreds of kilometers deep into Russian air space with attacks on two Russian air bases.

In a new display of defiance from Kyiv, Ukrainian President Volodymyr Zelenskyy traveled to an eastern city near the front line Tuesday, while Russia reported that strategic sites inside the country were hit by drone attacks for a second day.

A fire broke out at an airport in Russia’s southern Kursk region that borders Ukraine after a drone hit the facility, the region’s governor said Tuesday. In a second incident, an industrial plant 80 kilometers (50 miles) from the Ukrainian border was also targeted by drones, Russian independent media reported, apparently missing a fuel depot at the site.

Federal authorities did not immediately blame Ukraine. But Tuesday’s reported strikes were carried out a day after Moscow blamed Kyiv for unprecedented, similar attacks on two air bases deep inside Russia.

The attacks on the Engels base in the Saratov region on the Volga River and the Dyagilevo base in the Ryazan region in western Russia were some of the most brazen inside Russia during the war. In the aftermath, Russian troops carried out another wave of missile strikes on Ukrainian territory struck homes and buildings and killed civilians.

Ukrainian officials have not formally confirmed carrying out the drone attacks, maintaining their apparent policy of deliberate ambiguity as they have done in the past when it comes to high-profile attacks on Russian targets.

Kremlin spokesman Dmitry Peskov said that Russian authorities will “take the necessary measures” to boost protection of key facilities in view of the Ukrainian attacks.

Speaking in a conference call with reporters Tuesday, Peskov said that “the Ukrainian regime’s course for continuation of such terror attacks poses a threat.” Peskov reaffirmed that Russia sees no prospects for peace talks now, adding that “the Russian Federation must achieve its stated goals.”

Russia and Ukraine said on Tuesday they had exchanged 60 prisoners of war (POWs) on each side in the latest of a series of such swaps. Russia’s defence ministry said the freed Russian soldiers would be flown to Moscow to receive medical care.

In a video shared by the ministry, men in military clothing were shown walking off a bus and making phone calls. “All is well, alive and well. I’ll be home soon,” one freed prisoner said. — AP