Shorter, stricter lockdowns may be better for economy: Study 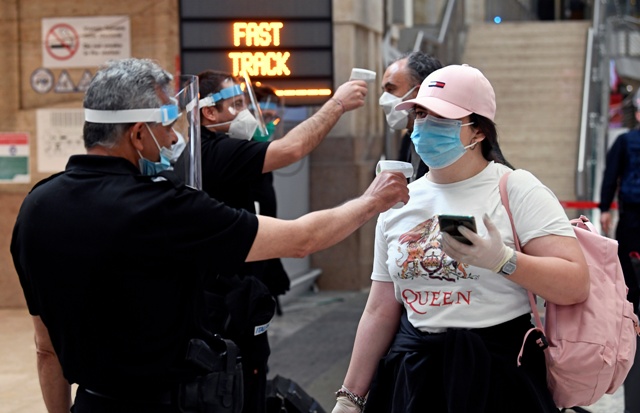 A commuter wearing a protective face mask and gloves has her temperature checked at Milan central station. Reuters

Stricter lockdowns imposed earlier—such as the two-month intervention imposed in China—are economically preferable to more moderate lockdowns imposed for four or six months, according to a new modelling study published on Wednesday.

The researchers, including those from University College London (UCL) in the UK, assessed potential global supply chain effects of COVID-19 lockdowns, modelling the impact of interventions on 140 countries, including countries not directly affected by the disease.

The study, published in Nature Human Behaviour, found that stricter lockdowns imposed earlier—such as the two-month lockdown imposed in China—are economically preferable to more moderate lockdowns imposed for four or six months, as duration of lockdown matters more to economies than their severity.

This is because businesses can absorb the shock of a brief lockdown better by relying on reserves and because shorter lockdowns cause less disruption to regional and global supply chains, according to the researchers.

The researchers also found that countries not directly affected by COVID-19 may experience large losses of more than 20 per cent of their GDP due to falls in consumer demand and bottlenecks in supply chains.

Particularly at risk are open or highly specialised economies, such as Caribbean countries that rely on tourism and Central Asian countries such as Kazakhstan that rely on energy exports, they said.

Also vulnerable are globalised industries that rely on difficult-to-replace suppliers, such as automobile manufacturing, where production is estimated to fall by up to half, according to the researchers.

“While predicting the true cost of lockdowns is not possible at this stage, our research suggests that shorter, stricter lockdowns minimise the impact on supply chains, while gradually easing restrictions over the course of a year may also be less disruptive than a swift lifting of restrictions followed by another lockdown,” Guan said.

The researchers estimated that gradually easing lockdown measures over 12 months would minimise supply chain impacts compared to lifting restrictions more quickly, over two months, and then introducing a second round of lockdowns in January next year, which they estimated would increase the cost by one-third.

“Our analysis quantifies the global economic benefits of robust public health responses and suggests that economic justifications to re-open businesses could backfire if they result in another round of lockdowns,” said study co-author Steven Davis, a professor at the University of California, Irvine in the US.

Looking ahead to a potential second wave, the researchers found that a strict, globally co-ordinated lockdown implemented for two months would be less economically costly than lockdowns happening in different parts of the world at different times—risking a potential economic loss to global supply chains by 50 per cent rather than 60 per cent.

This is because the economic cost of a lockdown goes beyond national borders and a shorter, one-off shock is easier to absorb, the researchers said.

“Companies will survive the supply chain failures that lockdowns cause by relying on reserves of stock or finding new suppliers. If a second shock hits, reserves may be low and supply chains only recently repaired—making a new break much more costly,” Guan said.

The most important factor affecting the global economic cost of lockdowns, the study found, was the number of countries implementing them, highlighting the importance to the global economy of one country containing an epidemic.

“Just as individuals staying at home protect others as well as themselves, so countries imposing strict lockdowns provide a public good to other countries,” said Professor D’Maris Coffman from UCL.

The strict, 80 per cent reduction is based roughly on China’s lockdown, during which data suggests 80 per cent of travel stopped, while the 60 per cent lockdown broadly reflects the approach taken in Europe and the US, they added. PTI