Padang has special significance for the Indian community in Singapore 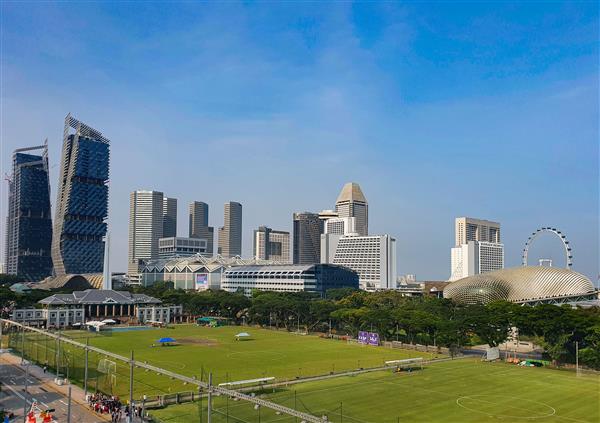 Singapore on Tuesday declared its 200-year-old iconic green open space Padang, a site of countless events in the country's history and from where Netaji Subhas Chandra Bose gave his 'Delhi Chalo' slogan in 1943, as its 75th national monument as the city-state celebrates its 57th National Day.

Located in the heart of Singapore's civic district, the 4.3 hectare Padang is the first green, open space on Singapore's list of national monuments - the highest form of recognition for a structure or site's significance.

The large field - popular for sporting events such as cricket, football, hockey, tennis and lawn bowling - is one of the oldest open spaces continuously used since the 1800s.

The Padang was gazetted on Tuesday as Singapore celebrated its 57th National Day amid a parade by uniform groups and colourful display of local culture and dances by schools and civic groups.

In view of its strong national, historical and social significance, the Padang is now preserved and accorded the highest level of protection in Singapore under the Preservation of Monuments Act, said the National Heritage Board (NHB).

The Padang, meaning a field in Malay, was distinguished by its public nature, as one of the only few open spaces accessible to the public in the colonial period, said NHB.

“The Padang has special significance for the Indian community in Singapore. It was here that Indian sepoys first established their campsites when the British established their outpost on the island,” he told PTI.

“This was also the place where Netaji delivered several speeches to the tens of thousands of INA soldiers and the local Indian population. It was here that he gave the Delhi Chalo slogan, set up the Rani of Jhansi regiment, and called for the total mobilisation of Indian resources to free India from British rule. Just before the war ended Bose established the INA memorial at the southern edge of the Padang,” he said.

“Today, a historical marker for the INA remains at the site,” Rai added.

The 200-year-old Padang joins 74 other National Monuments in Singapore, seven of which are related to the Indian community in the multinational city-state.

The victory parade of the Japanese surrender on September 12, 1945, was held on the Padang, which has since been witnessing Singapore's history, including the victory rally of the first fully elected Legislative Assembly on June 3, 1959, the installation of Yusof Ishak as the first Malayan-born Yang di-Pertuan Negara (head of state) and the unveiling of National Symbols on December 3, 1959; as well as the inaugural National Day Parade on 9 August 1966.

The Singapore Cricket Club (SCC), established during colonial times, and Singapore Recreation Club (SRC), another leading social club set up by local citizens, mostly Eurasians, sit on either end of the Padang, and are key community stakeholders involved in the maintenance and use of the monument.

The ‘Delhi Chalo' slogan against the British colonial rulers was held on the Padang when Netaji Bose saw the parade of Azad Hind Fauz soldiers on July 5, 1943.

“Every evening plus the weekends were spent on the Padang. Had the opportunity to organise hockey and football matches as a Chairman Board of Games at the Singapore Khalsa Association,” said Sarjit Singh, 76, a retired engineer, who has been a member of SCC since 1972.

“Cannot forget the six-a-side Hockey Tournaments both on SCC & SRC pitches. These nostalgic memories will remain as long as Padang remains there,” said Singh, who played hockey in the 1960s-1980s.

SCC President Zoher Motiwalla said the gazette has been “long overdue” in recognising Padang's position as the site of many significant national events, and its importance as one of the roots of the country's history and heritage.

“The SCC has been privileged to have been a part of the Padang since we were established in 1852 and to have been able to witness Singapore's growth and development around the field into a sovereign nation and our home.

“We take very seriously our role as one of the stalwart custodians of this newest National Monument, the Padang, and will continue to help maintain it as a place that brings communities together to interact and play through sports and leisure activities,” Zoher said.

The SRC has been the co-custodian of this historically and culturally rich heritage ground for the past 139 years, said SRC President Chang Yeh Hong.

“Besides maintaining this historical site, the Club has continued its tradition of promoting sports for all – every week the Padang is abuzz with sporting activities, from soccer to softball, while local and international soccer and softball tournaments, as well as youth soccer clinics, have also been organised, to name a few. This is a tradition we will proudly uphold,” Chang said.